Ed Sheeran crowned as the UK’s artist of the decade

Quite an achievement, in fairness to Ed.

Ed Sheeran has had a ridiculously impressive decade.

Back when everyone's favourite red-head was just singing at small venues in London, and uploading videos on to his YouTube page, who could have thought he'd end up one of the most successful songwriters of all time? 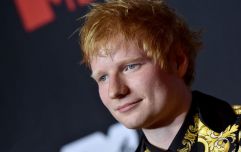 END_OF_DOCUMENT_TOKEN_TO_BE_REPLACED

Then in June of 2010, 'The A Team' was released, and nothing has been the same ever since.

He's gone on to make MILLIONS of pounds, have 12 number one singles and albums, spend a total of 79 weeks across the Official Singles and Albums Chart, and release songs with some of the biggest names in music, including Eminem, Cardi B, Justin Bieber, and WAY more.

And he has been rewarded for his efforts, being named as the UK’s Official Number 1 Artist of the Decade by The Official Charts Company.

"This is nuts – I didn’t really expect to have a career past five years... Thank you to everyone who’s supported me over the past 10 years," Sheeran said, "Especially my amazing fans. Here’s to the next 10!"

Watch Ed celebrate the news with his award below:

Now is it okay if we claim him as Irish? It seems only fair...

The Big Reviewski || JOE · The Big Reviewski with Ray Liotta, Goodfellas facts & Tom Hanks making us cry
popular
EU lorry drivers vow not to help UK get “out of the s**t they created themselves”
Netflix has just added arguably the very worst movie of the last decade
Four major employers join forces to create Ireland’s first remote working alliance
Up to 90% of petrol stations in the UK have run dry
Here’s what graduates from Irish colleges can expect to earn in the workplace
Plans for new bank holiday now at an "advanced stage"
The JOE Movie Quiz: Week 121
You may also like
5 days ago
It looks like Garth Brooks will play FIVE nights in Ireland after all
5 days ago
QUIZ: Can you get 10 out of 10 in the ultimate Ed Sheeran lyrics quiz?
5 days ago
Ed Sheeran announces extra show in Dublin's Croke Park as part of major 2022 tour
1 week ago
Fatboy Slim announces two major Irish shows for 2022
1 week ago
Ed Sheeran announces three Irish shows as part of major new tour
7 months ago
QUIZ: Can you name the Ed Sheeran song from a single lyric?
Next Page