There's a joyous atmosphere down in Knock today as thousands of people have shown up to see Pope Francis address the crowd.

It's only a flying visit as he pops down before going back to Dublin on Sunday afternoon to say mass in the Phoenix Park in what is expected to be in front of a crowd of over half a million people. 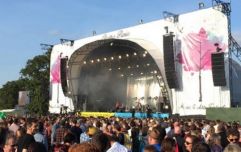 END_OF_DOCUMENT_TOKEN_TO_BE_REPLACED

While waiting for Pope Francis to arrive at the shrine from Ireland West Airport, the RTÉ cameras panned around the crowd and came across a nice moment between a member of An Garda Síochana and some of the assembled crowd.

His name is Garda John Coen and he was being kind to a wonderful little boy called Joseph.

For those of you who can't make it to the public events, the whole weekend will be broadcast live across a number of Irish TV stations. Full details here.

popular
One of Keanu Reeves' best movies has just been added to Netflix
CONFIRMED: Nightclubs to close, 50% capacity at indoor events and household mixing limit among new restrictions
The JOE Friday Pub Quiz: Week 272
The 50 most iconic songs of all time* have been revealed
Here's the lineup for tonight's Graham Norton Show
One of the best Irish movies ever made has just been added to Netflix
QUIZ: Name the country for each of these non-capital cities
You may also like
13 hours ago
Man seriously injured after shooting incident in Tallaght
1 day ago
Gardaí seize 38 dogs and other exotic animals in Dublin
2 days ago
Man arrested after shots fired at Garda patrol car
3 days ago
Four arrested following spate of robberies in Kildare
3 days ago
Gardaí stop and arrest man with weapons and balaclava in his car
3 days ago
Over €1.3 million of cannabis and cocaine seized in Dublin
Next Page