This is surely every the dream of every busker.

Buskers always sound better around this time of year.

Maybe it's the cold weather, maybe it's the Christmas spirit (yeah, it's not too early), or maybe it's just all in our head, but there's something about the entire phenomenon that seems a little more special throughout the Winter months. 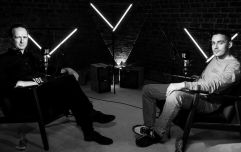 END_OF_DOCUMENT_TOKEN_TO_BE_REPLACED

And as brilliant as some of the buskers in Ireland are, we don't think you'll find a better busking video than this one anytime soon.

A young man named Paddy Finnegan was singing a lovely rendition of Glen Hansard's Oscar-winning song 'Falling Slowly', from the movie Once.

He was belting the song out on King Street South in Dublin, when he was thrown a couple of quid by none other than Glen Hansard himself.

Hansard approaches Finnegan's guitar case during the chorus, which is when Finnegan briefly stops singing to say: "I don't believe it!", before carrying on with the song.

Seriously, this is absolutely brilliant.

This comes only a few days after Hansard appeared on The Late Late Show, where he gave a scathing criticism of the Irish government's handling of homelessness in this country.

The Big Reviewski || JOE · The Big Reviewski with Dune, a mini-Hangover reunion & the best of Timothée Chalamet
popular
One of the best thrillers of the decade is among the movies on TV tonight
The JOE Movie Quiz: Week 125
QUIZ: Get the ball rolling with this General Knowledge Quiz
"Like a whip" – director describes fatal shooting on Alec Baldwin film set
A brilliant, under-seen Graham Taylor documentary is on TV tonight
The full list of all the new shows and movies coming to Netflix in November
10 great classic movies coming to Netflix this November
You may also like
2 years ago
A special Luke Kelly celebration concert takes place in Dublin next week
2 years ago
Glen Hansard announces Vicar Street gigs for 2019
2 years ago
Glen Hansard was extremely critical of the Government and their handling of the homeless crisis
3 years ago
WATCH: Hozier and Glen Hansard outdo themselves during this year's Christmas busk
4 years ago
Pearl Jam front-man Eddie Vedder has announced Dublin and Cork gigs with support by Glen Hansard
4 years ago
VIDEO: Glen Hansard plays gorgeous version of Ashes to Ashes to fans outside David Bowie’s New York apartment
Next Page