You should definitely go, and slip into John Mulligan's pub for a pint afterwards.

We've heard a lot about Apollo House lately, where Glen Hansard, Jim Sheridan, Damien Dempsey et al have led an act of 'civil disobedience' by turning it into a shelter for Dublin's homeless. 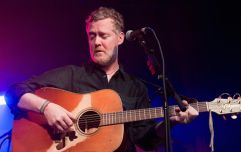 END_OF_DOCUMENT_TOKEN_TO_BE_REPLACED

We also shared the story of how businesses are helping those in need by sending food down to Tara Street but Hansard has decided to feed people's souls as well as their bellies.

With that in mind, he's staging a sing-song down on the corner of Poolbeg Street and Tara Street at lunchtime on Tuesday.

Go on, head along, and if you want to contribute a few quid all the better.

We'll sing a few songs at lunchtime tomorrow our side the Apollo mission! Poolbeg st, 1-2pm tea and a welcome..
Come along! Sing a song..

The Big Reviewski || JOE · The Big Reviewski with Y: The Last Man, that Malignant ending & a secret streaming service
popular
Cash, Rolexes, cars and one Canada Goose jacket seized in major Garda raid
New special payment for workers laid off during pandemic - Who is eligible and what are they entitled to?
You could be shopping in an Aldi store with no checkouts in Ireland in the near future
Government announces special €1,860 payment for laid-off workers during pandemic
QUIZ: Can you 100% this tricky Oasis quiz in just three minutes?
Men arrested trying to cross New Zealand border with boot full of KFC
UK company adopts four-day work week so employees can focus on themselves
You may also like
4 years ago
WATCH: Mannix Flynn claims "Apollo House completely failed" on The Late Late Show
4 years ago
REPORTS: Apollo House residents leaving the building on Thursday morning
4 years ago
PICS: Apollo House residents rejected these alternative accomodation arrangements due to poor standards
4 years ago
Apollo House organisers announce plans to leave the homeless shelter
4 years ago
Apollo House activists march to the Department of Finance
4 years ago
WATCH: Hundreds join Glen Hansard, Gavin James and Damien Rice for a sing-song on Grafton Street
Next Page