It's all fun and games in the world of rock and roll until someone files a copyright claim.

A few months ago, we had Nirvana suing clothing brand Marc Jacobs for seemingly appropriating their rather iconic aesthetic. 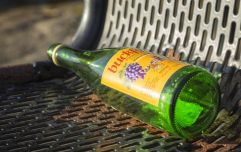 END_OF_DOCUMENT_TOKEN_TO_BE_REPLACED

Now we have the strange case of Guns N' Roses taking legal action over a knockoff beer and merchandise.

The Blast reports that Axl Rose, Slash and Duff McKagan have united to sue Canarchy Craft Brewery Collective over a beer they’ve been selling by the name of Guns ‘N’ Rose.

On top of this, GNR claim that the company has been selling hats, t-shirts, pint glasses, stickers, buttons, and bandanas with the name attached.

Court documents note that Canarchy previously attempted to trademark the name until the band intervened, and have ultimately agreed to stop after numerous requests, but not until March of 2020.

GNR argue that Canarchy “has refused to immediately and completely cease sales and marketing” of the beer and related goods.

As such, they are officially suing for copyright infringement and unspecified damages.

popular
Increase in passenger charges at Dublin Airport may be on the way
Netflix has just added 33 very big movies to its library
The long-awaited MetroLink is finally happening, for real this time, honest
The full list of cancelled flights in and out of Dublin Airport on Monday (so far)
Amazon Prime Video has just added 51 big movies to its library
REVIEW: Thor Love and Thunder is equal parts fun and blunder
Waterford man sentenced to three months imprisonment for operating "cruel and illegal" puppy farm
You may also like
1 month ago
Beer production in Ireland fell by nearly 50% in 2021 as alcohol consumption declines dramatically
1 year ago
Sligo brewery releases new beer which tastes like a Super Split
1 year ago
Americans offered free beer as latest incentive to get Covid-19 vaccine
1 year ago
5 craft beers to introduce you to the wonderful world of locally produced beer in Ireland
1 year ago
QUIZ: Can you name which country these beers are from?
2 years ago
Lidl selling non-alcoholic wine for €3 per bottle this Christmas
Next Page