Tickets go on sale this Friday.

Fresh from his run of intimate live rehearsal shows at The Academy in Dublin, internationally acclaimed and platinum-selling artist Hozier has announced that he plans to play another five shows across Ireland during the month of December.

His forthcoming tour – which will be held in the run up to Christmas – will see the Wicklow native play Dublin, Belfast and Kerry before finishing up on 20 December.

The gigs are part of a series of shows across Europe, starting from 11 November.

Dates are as follows:

I’m very excited to announce new live dates and take the new songs on the road. General sale is on Friday and to get pre-sale access to my UK & Irish dates follow the link. Would love to see you at a show! 🎫 https://t.co/VXL2QmvHnQ pic.twitter.com/YFw2AgrGHx

Tickets for all shows will go on sale this Friday, 21 September, at 9am via Ticketmaster and tickets are limited to four per person. 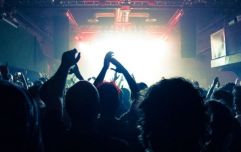 END_OF_DOCUMENT_TOKEN_TO_BE_REPLACED

The singer, who has kept a relatively low profile for the past year, teased that he was gearing up to return to the spotlight back in June when he announced a run of North American shows for later this year.

"Very excited to announce the upcoming tour for later in the year, which will coincide with the releasing of new work," he said in a statement at the time.

"The completion of the record is fast approaching and I’m eager to share it with everyone."

The release of his new single Nina Cried Power soon followed, with Hozier telling Rolling Stone that the piece was his way of honouring the freedom-fighting singers of years past.

He recently announced his plans to drop his second as-yet-untitled album in early 2019.


popular
QUIZ: Can you name the Sega Mega Drive game from the screenshot?
Brendan Gleeson's upcoming performance as Donald Trump is 'scary' and 'too close for comfort'
QUIZ: How many of these Derry Girls characters can you name?
The JOE Friday Pub Quiz: Week 179
Met Éireann predicting snow this weekend and well into next week
Britain's "iconic" post-Brexit passport unveiled, actually manufactured in Poland
5 new Netflix additions to spend your weekend watching
You may also like
1 day ago
Three arrested following shooting and stabbing incidents outside church in Galway
1 day ago
Police investigating attempted ATM robbery in Antrim
2 days ago
Gardaí launch investigation into four-lane motorway sulky race
3 days ago
A preferred route has been chosen for the new Cork to Limerick motorway
4 days ago
History to be required Junior Cycle subject from September
4 days ago
Two Irish citizens have tested positive for the coronavirus
Next Page