Hozier's Take Me To Church is a rip-off, according to this musician

"Take Him To Court".

The musician Chilly Gonzales has been studying the smash-hit single Take Me To Church and you may not like what he has to say.

According to the accomplished pianist, Hozier's breakthrough hit is awfully similar to Feist's How Come You Never Go There, which was released more than a year beforehand. 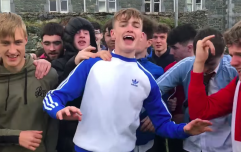 END_OF_DOCUMENT_TOKEN_TO_BE_REPLACED

Like us, you may claim to either know this already or dismiss the notion completely. But it's worth checking out Gonzales's video below as he attempts to justify his pretty ballsy reasoning.

popular
Amazon Prime Video has just added 21 big movies to its library
Here is a list of every Bank Holiday in Ireland in 2023
One of the best crime thrillers ever is among the movies on TV tonight
The 50 most iconic songs of all time* have been revealed
Netflix has just added one of the best sci-fi movies of recent years
Mark Hamill on the one piece of dialogue he got removed from the original Star Wars
Teenager killed in shark attack after swimming with dolphins in Australia
You may also like
1 month ago
Irish tourist dies after falling from moving train in Thailand
8 months ago
Irish man heading to Love Island villa as contestants are announced
10 months ago
Biden misspoke because he is Irish, says former CIA director on CNN
10 months ago
QUIZ: How well do you remember your primary school Irish?
10 months ago
QUIZ: Can you name every Irish Oscar winner?
10 months ago
PERSONALITY TEST: What percent Irish are you?
Next Page