THIS IS THE GREATEST SHOW.

Hugh Jackman opened the BRIT Awards ceremony for 2019 with the opening number from his hit film The Greatest Showman. Whether you've seen the film or not - I'd recommend it if you like musicals, but it's not exactly Casablanca - we can all agree that the song, 'The Greatest Show', is a banger.

Perfectly crafted to lift your mood, it was the perfect opening to this year's awards ceremony and viewers both at the venue and watching at home went absolutely mad for it.

Just got a bit distracted by Hugh Jackman on the BRIT awards! 😍 #TheGreatestShowman #woofwoofwednesday

BEST OPENING TO A SHOW EVER!!!! HUGH JACKMAN SMASHED IT!!!!! #BRITs #TheGreatestShowman pic.twitter.com/yTNj0sdvkT 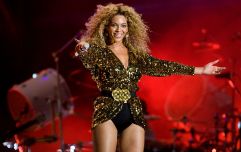 END_OF_DOCUMENT_TOKEN_TO_BE_REPLACED

Jackman, of course, is coming to Dublin for THREE gigs as part of his 'The Man. The Music. The Show' world tour in May and there are a very limited number of tickets available on Ticketmaster here.

As if we didn't already love him enough, meanwhile, just last month, he sent a lovely message to one of his biggest Irish fans, seven-year-old Emma Cooney from Lucan in Dublin, whose mother posted a video of her singing 'A Million Dreams' to Jackman on Twitter, prompting the following response from the great man...