A huge step forward for the young Irish rapper.

Irish musician JyellowL will be the only Irish artist to feature on the soundtrack for FIFA 20. His track, 'Ozone', will join the likes of Major Lazer, Post Malone, Foals, Avicii, J. Cole, Logic and Meek Mill on this year's playlist.

The FIFA soundtrack has long been home to many a banger, including 'Red Morning Light' by Kings of Leon, 'Sell Out' by Reel Big Fish and '7 Days a Week' by The Sounds. 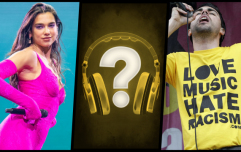 END_OF_DOCUMENT_TOKEN_TO_BE_REPLACED

EA Games latest iteration of the game comes out on 27 September.

Speaking about the achievement, JyellowL said: "When I was younger I used to dream that I’d be on FIFA as a player by FIFA 20", he says. "Now that it’s that time, I’m not playing... buuuut MY SONG IS!"

Currently working on his first album for release in 2020, he will play his largest headline show to date at Whelan's on 10 October.

You can listen 'Ozone' below:

popular
Belgium becomes first nation to introduce compulsory monkeypox quarantine
An underrated Robert De Niro comedy is among the movies on TV tonight
Two men arrested during attempted burglary in Dublin
Tory MP facing drink spiking claims as one fellow politician woke up to find 'nipples being licked'
Met Éireann issue warning for potato blight this week
Coleen Rooney 'confident she's won' Wagatha Christie trial against Rebekah Vardy, according to reports
You may also like
2 years ago
Some of the biggest names in football are taking part in a FIFA 20 tournament this week
2 years ago
Here's how you can vote for EA SPORTS™ FIFA Team of the Year
2 years ago
FIFA 20 makes a breakthrough that FIFA hasn't made in years
2 years ago
An extremely useful guide to being a massive dickhead on FIFA 20
2 years ago
The top 20 player ratings for FIFA 20 have been revealed
2 years ago
Great news, FIFA Street makes a glorious return in FIFA 20
Next Page