A gorgeous rendition of a magnificent song.

This week's episode of The Late Late Show was a special music edition, with some of Ireland's biggest artists taking part.

It attempted to bring the magic of the traditional Christmas Eve Grafton Street busk directly into viewer's homes in aid of the Simon Community. 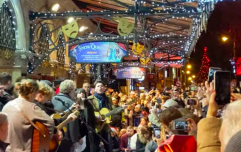 END_OF_DOCUMENT_TOKEN_TO_BE_REPLACED

Well over €1.2 million was raised for the charity, with the Simon Community thanking everyone involved.

Shane MacGowan, John Sheahan, Glen Hansard, Lisa O'Neill and Finbar Furey all sang a lovely rendition of 'Raglan Road' on the show, which was a particular highlight of the episode.

Rock legends Bono and The Edge performed the songs 'Walk On' and 'Baby Please Come Home', while Bono himself talked about his support of the frontline workers.

Hozier also appeared on the show to talk about the generosity of Irish people:

The Big Reviewski || JOE · TBR Spotlight: The Falcon and the Winter Soldier Episode Five - 'Truth'
popular
QUIZ: Can you answer all of Sinead and Daniel's questions on the Irish Celebrity Who Wants to be a Millionaire?
The JOE Friday Pub Quiz: Week 239
QUIZ: You'll find it hard to name all these towns from their Irish name (part 2)
The JOE Music Quiz: Week 53
QUIZ: How well do you remember the very first Game of Thrones episode?
The 50 most iconic songs of all time* have been revealed
Taoiseach Michéal Martin says Ireland could face another lockdown by winter
You may also like
2 years ago
Imelda May warns that an imposter is using social media to scam her fans out of money
2 years ago
EXCLUSIVE: Jeff Goldblum has a secret Irish weapon for his upcoming debut album
3 years ago
Gavin James, Il Divo, Bryan Ferry and more for Trinity College gigs this summer
3 years ago
Brendan Gleeson to team up with Imelda May, Andrea Corr and more on new Irish folk album
3 years ago
Jools, Imelda, Alan or Graham: who will you celebrating NYE with tonight?
3 years ago
Imelda May to perform at half-time of All-Ireland Final
Next Page