Rap fans were delighted when a couple of weeks ago, J. Cole announced that he had a new album on the way.

And even though Revenge of The Dreamers III isn't due out until some point in the near future, we were given a taster of what to expect through a spontaneous new Cole song on Thursday morning.

END_OF_DOCUMENT_TOKEN_TO_BE_REPLACED

'Middle Child' dropped and immediately got a great reception online, as Cole songs tend to do, and although we think it most certainly is a banger, there are also some lyrics that have caught people's attention.

A few lines in the song appear to be directed at Kanye West, following his recent beef with Drake.

Cole appears to take Drake's side in the rivalry, firstly by saying: "This watch came from Drizzy, he gave me a gift", highlighting the friendship that the two have.

But the next couple of bars were about Kanye, and they were far less positive. 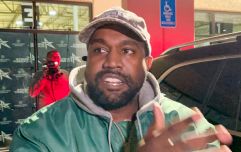 END_OF_DOCUMENT_TOKEN_TO_BE_REPLACED

This appears to reference Kanye's recent Twitter rant in which he had a go at Drake.

Critics of Kanye seem to think that he started having a go at Drake on Twitter as a publicity stunt in an attempt to promote his sneakers, which hadn't been selling as well as anticipated at the time.

It also fairly widely accepted that Kanye paved the way for Drake, explaining the "slid in my lane" line at the end.

Kanye is yet to reply, and unfortunately if he does, it probably won't be in a song, but we'll keep an eye on his Twitter page.

You can listen to 'Middle Child' here:

popular
Boy seriously injured after alleged dog attack in Wexford
20 years ago, one of the best sci-fi movies of the 21st century was a box-office bomb
Very popular US fast food chain planning to open in Ireland
Katherine Ryan says famous TV star is a ‘predator’ and everyone in industry knows
Surprise frontrunner emerges as potential next James Bond as producers 'love him'
QUIZ: Only the sharpest will get 100% in this General Knowledge test
QUIZ: JOE's Big News Of The Day Quiz #19
You may also like
1 month ago
Quentin Tarantino denies he stole idea for "Django Unchained" from Kanye West
1 month ago
Kanye West kicked out of Skechers office one day after Adidas ditched him
1 month ago
Adidas terminates deal with Kanye West
1 month ago
Rapper Kanye West says filmmaker Quentin Tarantino stole Django Unchained idea from him
1 month ago
Kanye West 'walks out' of Piers Morgan interview as chat gets heated
6 months ago
The JOE Music Quiz: Week 105
Next Page