All music fans can remember that exact moment when they hear a seminal album for the very first time which you instantly fall in love with.

Rage Against the Machine's self-titled debut is without doubt one of the most important records that this JOE has ever heard because it offered a tantalising glimpse into a broader musical world that was waiting to be explored.

END_OF_DOCUMENT_TOKEN_TO_BE_REPLACED

The band weren't ashamed to show their influences as the likes of The Clash, Public Enemy, Black Sabbath, Minor Threat and Mc5 all featured heavily.

Rage were like nothing else that my young ears had ever heard before. They were ballsy, rebellious and unafraid to speak out against the political and social injustices that they felt passionate about, even if I didn't know at the time what they actually were.

What else would you expect from a band who took their name from a Karl Marx quote?

Apart from this, they were superb musicians whose unique mix of metal, funk, hip-hop and rap was akin to a musical Molotov cocktail being thrown into my safe little musical world. They made rap manifestos that rocked and were ballsy enough to play metal riffs that people could dance to.

Their amazing debut album turned 22 on Monday while their 1999 album, Battle for Los Angeles, was released 15 years ago on Sunday.

Here are some reasons why this particular JOE adores these two albums...

END_OF_DOCUMENT_TOKEN_TO_BE_REPLACED

It's a shame that the majority of modern albums don't seem to take risks when choosing daring or striking imagery on their album covers but this is an accusation that you can't level at RATM.

Their debut album features a photo of the self-immolation of Thích Quảng Đức, a Vietnamese Buddhist monk who was protesting against the US backed President Ngô Đình Diệm's administration for oppressing the Buddhist religion.

The imagery is bold, defiant, extreme, dangerous, rebellious and political. It perfectly captures the spirit of Rage Against the Machine, as does the original artwork on Battle for Los Angeles, which was designed by LA Street Phantom, aka Joey Krebs, aka Joel Jaramillo. 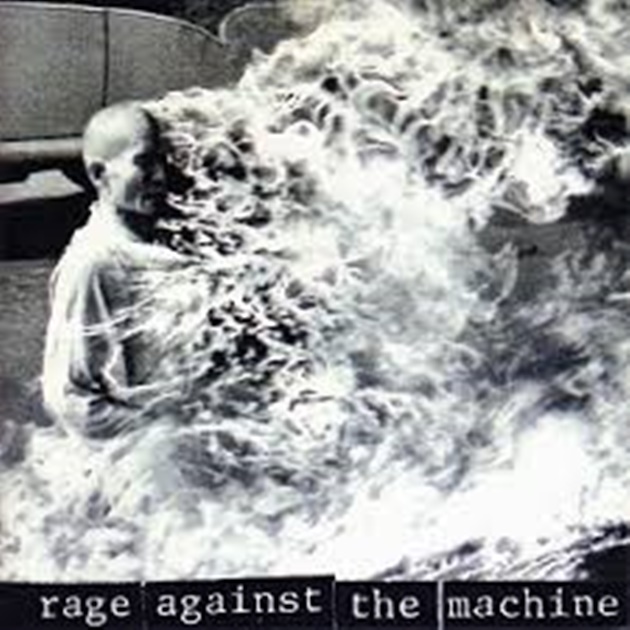 A first song that was also a call to arms

END_OF_DOCUMENT_TOKEN_TO_BE_REPLACED

If ever a song was indicative of the raison d'etre of a band's existence then it's the opening track from the band's 1992 debut, Bombtrack.

Tim C's enticing yet ominous baseline is the equivalent of the band lighting the fuse before De La Rocha's politically-charged lyrics and Tom Morello's distinctive guitar playing merge in an explosive sound that came to define the band.

Who would have thought that a Harvard graduate guitarist that was raised on metal would be able to sync so perfectly with a punk-rock vocalist with a burgeoning hip-hop obsession?

JOE can't even begin to describe the seismic effect that hearing those opening chords had and the sheer sonic bombardment that ensured from those first glorious beats that fused metal, rap, funk and hip-hop.

The notes on their debut album

The band showed that they have a good sense of humour about themselves when they inscribed "no samples, keyboards or synthesizers were used in the making of this record," which can be found at the end of the sleeve notes.

The band also refer to themselves as "Guilty Parties" on each of their four studio albums.

Did you know that RATM opened for U2 back in 1997 on the first two weeks of the American leg of the PopMart Tour, for which all of Rage's profits went to support social organisations?

The trio of Bullet in the Head, Know Your Enemy and Wake Up all in a row

The hardcore RATM fans will probably say that Bullet in the Head is the band's best song to get a mosh-pit going and they're probably right.

The tune kicks-off with a classic hip-hop beat before descending into two minutes of cursing, screaming and adrenaline-pumping wild fury.

Rather than cool things down afterwards, the band turn their sonic assault up by about ten decibels on the superb Know Your Enemy, which, in this JOE's opinion, remains their best and most energetic song.

Tom Morello's use of pedals, loops, distortion and feedback is simply wonderful as his guitar playing resembles a DJ scratching away on a set of decks. The way the song builds up then breaks down in a swirl of riotous guitars and rousing lyrics is the band at their very finest.

Take a look at their energetic performance of the song at Finsbury Park.

If we were to choose just one song that sums up the spirit of RATM's debut then it's their defiant anthem that gleefully raises a “fist in the air in the land of hypocrisy”.

Wake Up points an accusing finger at all things related to American foreign policy, corporate greed and the perceived public apathy towards these things.

De La Rocha has rarely been this passionate, angry and defiant than when he is singing about the topics of racism, Malcom X, Martin Luther King and some of the others previously mentioned.

Some of their incredibly poignant and rebellious lyrics

“Yes I know my enemies, They're the teachers who taught me to fight me.” - Know Your Enemy

"Why stand on a silent platform? Fight the war, f*ck the norm.” - Freedom

"Anger is a gift." - Township Rebellion

The opening three songs from Battle for Los Angeles

Evil Empire is probably the thinking man's RATM album because it split critics and fans alike but their third album was a lot more focused, loud and angry.

The opening three tracks from Battle for Los Angeles are arguably some of their strongest work as Testify acts a a rallying cry to the masses to shake them up from their 1999 musical slumber.

The album was a much-welcomed antidote to the radio sounds of mouseketeers and rap-metal.

If Testify was a statement of intent then Guerilla Radio was a declaration of war against the political apathy that existed in a pre-George Bush US, illustrated perfectly when De La Rocha says "More for Gore or the son of a drug lord, none of the above, f*ck it cut the cord".

The real draw of this song is Brad Wilk's manic drumming, which almost sounds like it's beckoning the listener to stand up and march to Rage's defiant beat.

If the first two songs were slowly building up a level of contempt, displeasure and defiance then it all explodes in the wonderful Calm Like A Bomb.

This video for Sleep Now in the Fire

How many artists would actually go to jail for what they believe in? You may already know that the Oscar winning documentary maker Michael Moore directed this video, which has since been heralded as one of the greatest in rock n' roll history.

No money on Wall Street was harmed during this video.

Before this event started, Metallica's drummer Lars Ulrich was innocently asked this question by a interviewer on the red carpet: "Who are you going to see?" He replied: "Rage Against The Machine, there's no-one else playing."

The amazing video for Sleep Now in the Fire lost out to Limp Bizkit's celebrity filled Breakstuff but RATM's bassist wasn't going to take the defeat lightly.

Rather than take the news quietly, Tim C decided to climb the scaffolding in protest at this ridiculous decision.

They made a timeless rock anthem from six lines of lyrics

If nothing else, it stopped X-Factor from going to Christmas number one but this is a tune that's so good that it should be number one for the remaining 51 weeks of the year as well.