Commercial tie-ins can go horribly wrong, of that there is no doubt.

Every now and then, though, it works.

END_OF_DOCUMENT_TOKEN_TO_BE_REPLACED

Take last year's 'Causing Trouble' for instance; a combined effort from Saint Sister, Jafaris and Kormac in association with Three Ireland's Made By Music initiative.

In that instance, the song rose above any cynicism one might have with regards to a brand overseeing a music project and has become a standout track in Saint Sister's set as they continue their impressive rise.

Giving an artist time and resources to craft their own vision can work out for all involved, including the listener.

Picking up this thread, Made By Music returns with the first of two new tracks, both of which once again present an inspired mix of Irish talent. 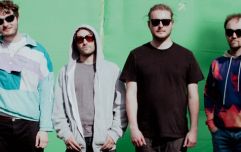 END_OF_DOCUMENT_TOKEN_TO_BE_REPLACED

First up is 'Follow the Sound', a soothing summer anthem that unites Kean Kavanagh - fresh from supporting Vampire Weekend and trust Kojaque confidant - Fehdah - a specialist in futuristic Afro soul music - and David Kitt, who continues to dazzle whether entering in singer-songwriter wanderings or electronica mastery under his New Jackson moniker.

Directed by Ian Roberston, the video follows the journey of a newlywed bride who loses herself accordingly in the music.