JOE continues our look at some of the biggest names in music, with one of the best bands around, the Kings of Leon

A prolific band of brothers and cousins, Kings of Leon have churned out one brilliant album after another since they first got together back at the turn of the millennium.

For many gamers, FIFA 2004 might have been the first time that the name Kings of Leon surfaced on our radars, and we were able to hear 'Red Morning Light' again and again and again. And again and again. That first album touched on the blues and rock pedigree of the group and their Southern roots, and captured the gritty and raw sound of a band that was still learning their trade, but had some serious talent. 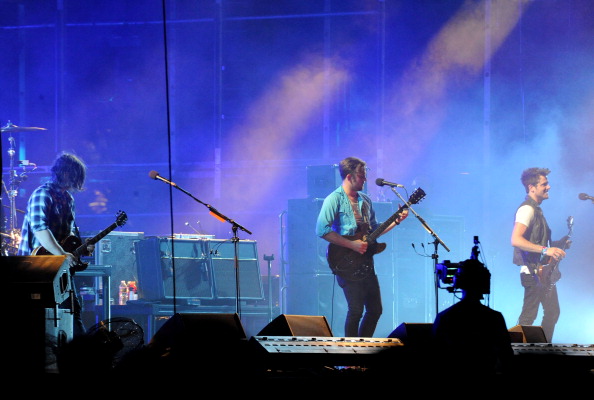 END_OF_DOCUMENT_TOKEN_TO_BE_REPLACED

The melodies were catchy and the hooks were there, and while 'Red Morning Light' was a big hit, 'Molly's Chambers' soon followed suit, and showed a band that were perfectly in their pomp, paying homage to the rock of decades past, right down to their look. Caleb Followill's vocals became unmistakable at the helm of the outfit, and although they were still a young outfit, it was clear that big things were in store.

Their next album, Aha Shake Heartbreak was a serious step forward, and laden with chart hits, so that they still had an element of something unpolished about them that kept both critics and their fans happy. That fanbase was growing by the day too, and as songs like 'Bucket' became commercial successes, but they kept in touch with their rock roots, garnering praise from their peers and touring with bands like Pearl Jam, who retain that level of cred.

END_OF_DOCUMENT_TOKEN_TO_BE_REPLACED

Those bigger gigs in larger venues did begin to shape the band's sound as they developed however, and with Because of the Times, it was clear that they were now an arena rock outfit who were here to stay, and they were only going to be getting bigger. If you managed to avoid 'Knocked Up' at all in the year 2007 you were doing well. This album was more polished, more produced and more pop friendly in general, and in exchange for bigger success, the band seemed to be losing their raw edge.

By 2008 they had another album out, and while it arrived quickly after their previous effort, this confirmed their status as huge headliners with what was to be their most popular work to date. Huge hits like 'Sex on Fire' gave them a number one single, while the album itself also hit the top of the charts, bringing with it all the glamour of the life of a rock star.

END_OF_DOCUMENT_TOKEN_TO_BE_REPLACED

We mean, of course, the obligatory goat remix of their song.

Their subsequent two efforts have not quite hit the highs of Only by the Night, and while Come Around Sundown was not without its charms ('Pyro' was a decent effort by the group to blend their earlier sound with some of their new, heavier-produced work), Mechanical Bull has seen them re-emerge as a dominant force in the charts.

'Super Soaker' was another catchy single that got them plenty of airplay, and with a huge tour in support of it (notably coming to Ireland to play Dublin's Marlay Park in July in what promises to be a barnstormer), there's definitely no stopping these lads now.

We just hope that they muster a better performance than this... (yes, we know it's a fake)

Live music fan? Why not enter our competition to win tickets to the upcoming eurosaverLIVE event featuring Gavin James and O.R.B. at Monroe’s in Galway on May 16.

The event follows the huge success of the inaugural eurosaverLIVE event featuring Tinchy Strider at The Grand Social in Dublin last year and promises to be a cracking night.

For more details on how to enter, click here.

popular
The JOE Friday Pub Quiz: Week 308
Infant dies after being hit by jeep in Roscommon
Netflix has just added 23 very big movies to its library
Pilots fly over destination airport at 37,000 feet because they were both sleeping
Two Irish people arrested in "smuggling event" near Miami
One of 2022’s best hidden-gem comedy series is available to stream
Multiple fatalities after planes collide mid-air over California airport
You may also like
1 day ago
QUIZ: Can you identify the famous song from the opening line?
3 days ago
Pop Idol star Darius Campbell Danesh has died, aged 41
1 week ago
The 10 must-watch events at the 2022 Dublin Fringe Festival
1 week ago
Family of Ashling Murphy share heartbreaking tribute at Fleadh Cheoil
2 weeks ago
Taylor Swift responds after report claims she has the highest celebrity private jet emissions
3 weeks ago
The JOE Friday Pub Quiz: Week 305
Next Page