Probably the biggest story around the whole Apple announcement of the iPhone 6 was the news of U2 releasing their brand new album to the masses for free. But is it any good?

It caught everyone by surprise with its timing and even more so when everyone realised that it was free for anyone possessing an iTunes account. Social media was awash with news of the album's release so now that it is here, is it any good?

Maybe I am biased, being a U2 fan, from back in the old days where everything was in black and white, but I am very impressed with the new offering from the Dublin foursome. In my opinion, certainly their best work since 'How To Dismantle An Atomic Bomb' (pic below). 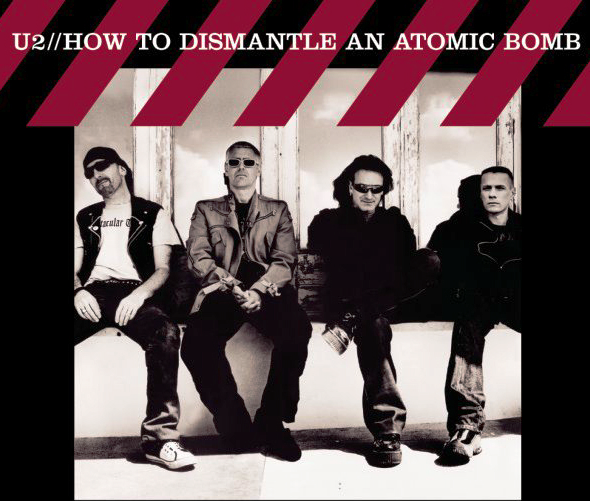 END_OF_DOCUMENT_TOKEN_TO_BE_REPLACED

Shortly after the surprise release, Bono said that the album was: ''A Dublin album, all about teenagers on the Northside."

The album springs into life with the opening track 'The Miracle (Of Joey Ramone)' which is obviously a nod to The Ramones (no sh*t Sherlock) and the lyrics describe how Bono was fascinated and blown away when he first heard a song from The Ramones on the radio. It's a rip-roaring, guitar-heavy song and complete with obligatory Edge backing vocals is a great start to the album.

The opening of the next track, 'Every Breaking Wave', sounds very similar to the opening of one of their older classics, 'With Or Without You'. However, it's just the start and it soon explodes into a typical U2 pattern of chiming guitars, soaring vocals and an impossibly catchy chorus. "Are we ready to be swept off our feet..." sings Bono and my feet are already gone, swept from under me.

END_OF_DOCUMENT_TOKEN_TO_BE_REPLACED

There have been accusations of U2 doing a 'U2 by numbers' album, but I'm not entirely sure that's a bad thing. There is something very familiar, almost reassuring about their sound and I for one am thankful it still prevails.

'California (There Is No End To Love)' kicks off with a very Beach Boys sound with the repetitive mantra of 'Ba-ba-ba-barbara, Santa Barbara' followed by a Bono masterclass in lead vocals, ably backed up by rasping drums from Larry Mullen Jr. 'Song For Someone' has hit single written all over it and its radio-friendly melody will ensure it becomes one of their classics. Again, U2 show they have such an ear for a catchy tune and this track is further evidence of that.

'Iris (Hold Me Close)' is probably the most personal track on the album given that this is a tribute to Bono's now deceased mother. It's not a ballad, far from it. It's another swashbuckling, guitar-laden U2 sing-along. 'Volcano' is next up and it erupts (sorry) with a scorching bassline from Adam Clayton and it could be argued that this song represents some of the finest work Mr Clayton has ever done. It's got a lovely retro feel to it and one of the main contenders for song of the album at this early stage.

The next track is up there with some of the greatest work U2 have ever done in my opinion. 'Raised By Wolves' is not a song about Kevin Doyle and it's certainly not a rebel song. This is a very well put together song encompassing everything that is great about U2. Rhythm, bass, drums, infectious chorus, soaring guitars and with a vocal from Bono that wouldn't have sounded out of place on their Boy or War albums. This has the potential (at my third listen) to be a U2 masterpiece.

END_OF_DOCUMENT_TOKEN_TO_BE_REPLACED

Going back to his roots, Bono brings us 'Cedarwood Road' which is the name of the road he grew up on in Finglas East. This opens as an angry, snarling beast of a song and then settles into a superbly crafted song where Bono actually sings the words "Northside, just across the river from the Southside.' In case anyone was wondering. It's a stomping tune and guaranteed to be a real crowd pleaser when the inevitable stadium tour happens.

'Sleep Like A Baby Tonight' is next up and it's the one track I haven't fully embraced yet. It's not bad, it just hasn't jumped out at me like some of the others. In past experiences of new U2 album releases, this is not a bad thing as I've usually gone on to love the songs I initially had doubts about. We'll see if that happens with this track. Bono goes falsetto a couple of times and there is a very Hendrix-type guitar riff towards the end, but my jury is still out on it.

The same issue prevails here with 'This Is Where You Can Reach Me Now'. It's just not, in my opinion, as good as what has gone on before. Again, I stand to be corrected as the sands of time pass by, but for now, it's not doing it for me. There is a pretty funky guitar riff ripping it's way through the track and the chorus has plenty of potential.

The album comes to a close with 'The Troubles' and Bono is joined on vocals by Swedish indie singer-songwriter Lykke Li. They compliment each other brilliantly and this is a fantastic closer to a really good album. Edge does a bit of showing off here and why shouldn't he?

You may not like U2, but the album is free to download till the middle of October and you could do worse than listening to it. To me, it is U2 back to their best and I am really excited to see these tunes performed live when they tour next year.

popular
Eurovision producers reveal "irregular voting patterns" during Saturday night's final
One of Liam Neeson's best ever performances is among the movies on TV tonight
QUIZ: Try out one of our trickiest General Knowledge Quizzes yet
One of the longest lunar eclipses of the decade will be visible in Ireland tonight
Where will 2023's Eurovision be held if Ukraine can't host?
QUIZ: True glory awaits if you can 100% this General Knowledge Quiz
REVIEW: Van Gogh Dublin is a truly unique cultural experience
You may also like
19 hours ago
Eurovision producers reveal "irregular voting patterns" during Saturday night's final
1 week ago
U2 perform in Kyiv metro station following invite from President Zelensky
3 weeks ago
QUIZ: Can you match the one-hit wonder to the artist?
1 month ago
One of the best music documentaries ever made has just been added to Netflix
2 months ago
WATCH: Last Week Tonight explains why concert tickets have become so expensive
1 month ago
Kanye West has finally been suspended from Instagram
Next Page