Since releasing their debut single back in 2017, alternative rock band Myth have built up a loyal and ever-growing fanbase.

Playing sold-out shows in venues such as the Workman;s Club and Underground, it's plain to see that Myth are indeed, the real deal. 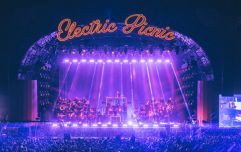 END_OF_DOCUMENT_TOKEN_TO_BE_REPLACED

They draw their inspiration from artists of all genres and this can be heard within their sound, which is a mixture of Jefferson Airplane, The Cranberries, Fleetwood Mac and Paramore.

Their brand new offering, called 'Oh, La', is further evidence that this is a band on the ascent.

The brooding, haunting vocals of Alex Webb are ably supplemented by a thundering bass line and some really top-notch grungy axe-monstering by the rest of the band. There's even time for a violin interlude and we are very okay with that.

At just over three minutes in length, it's the perfect synopsis of the band and gives you an idea of what they're about.

You can check out more about the band online and on social via the channels below.

If you would like to submit a song for consideration for Song of the Day, please send an email with details and with ‘Song of the Day’ in the subject line to editorial@JOE.ie.

The Big Reviewski || JOE · Emile Hirsch on Tarantino, a Speed Racer sequel, and new Irish horror Son
popular
Two Irish cities named the friendliest in Europe by leading travel magazine
Met Éireann has issued a weather warning for seven counties
RTÉ confirms Eoghan McDermott will not be returning to 2FM
The 50 most iconic songs of all time* have been revealed
Happy 25th anniversary to the best mid-movie plot twist of all time
PICS: The man with the biggest penis in the world has one unbelievable problem with it
People think they've figured out the ranking of the viewers on your Instagram Stories
You may also like
1 day ago
JOE’s Song Of The Day #886 – Manamon 'In A Frame'
2 days ago
The JOE Music Quiz: Week 47
1 week ago
JOE’s Song Of The Day #885 – Rebecca Locke 'Manic Energy'
1 week ago
The JOE Music Quiz: Week 46
1 week ago
Bruno Mars and Anderson Paak join forces for new joint album
1 week ago
Ireland's entry for the 2021 Eurovision song contest has been revealed
Next Page