Kanye West for Mayor of Chicago? A superfan has already started his election campaign

Politics in the Windy City may be about to get a bit cooler...

Kanye West is one of the most opinionated personalities on the planet and he also talks complete sh*te at times, so you'd imagine he'd make a perfect politician.

One fan certainly thinks so and he believes in Kanye so much that he set up Kanye West for Mayor of Chicago 2015, which is pretty self explanatory and to JOE's surprise, this isn't a joke.

END_OF_DOCUMENT_TOKEN_TO_BE_REPLACED

Ben, who set up the site says: "I don’t like the direction that the city is heading in and think that an internally diverse, multi-pronged social movement lead by a charismatic and problematic leader is the best way to ahead another direction. Kanye West is the best such leader I can think of, so that’s why I made this website and am organising this show."

We know Kanye and his new wife Kim Kardashian are currently busy on their honeymoon in Cork, if the rumours are to be believed. Ben has a special surprise waiting for the rapper when he returns home because he's written an open letter to his potential new leader. 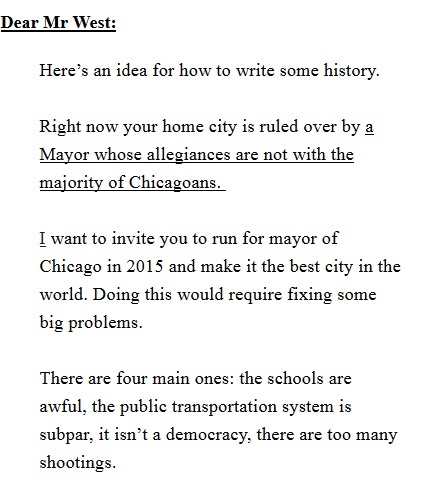 The entire open letter is here and you have to hand it to Ben, the amount of effort he's put into this is massive, so he genuinely believes Kanye is the man to lead the people of Chicago.

Mayor West does have a ring to it. But, to be honest, we prefer this Mayor West... 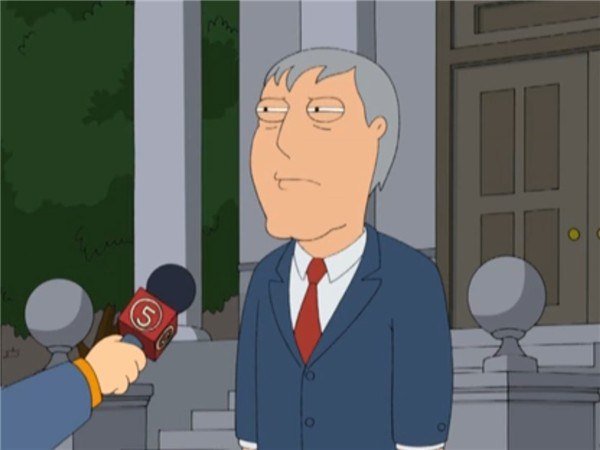 Hat-tip to Consequence of Sound.

The Big Reviewski || JOE · The Big Reviewski with Y: The Last Man, that Malignant ending & a secret streaming service
popular
Cash, Rolexes, cars and one Canada Goose jacket seized in major Garda raid
You could be shopping in an Aldi store with no checkouts in Ireland in the near future
Man (40s) in critical condition following serious road collision in Cork
Government announces special €1,860 payment for laid-off workers during pandemic
New special payment for workers laid off during pandemic - Who is eligible and what are they entitled to?
Men arrested trying to cross New Zealand border with boot full of KFC
QUIZ: Can you 100% this tricky Oasis quiz in just three minutes?
You may also like
1 week ago
Garth Brooks in “advanced” talks to play at least three concerts in Croke Park next year
2 weeks ago
JOE’s Song Of The Day #910 – PRiiCE 'Sweet Life'
2 weeks ago
The JOE Music Quiz: Week 73
2 weeks ago
ABBA to release first new songs since the 1980s with "historic" comeback
3 weeks ago
Ten of the best memes as James Corden dressed as a rat stops traffic for flashmob in LA
3 weeks ago
JOE’s Song Of The Day #909 – Cian Ducrot ‘Chewing Gum’
Next Page