It's a lovely cover of the song.

If you don't know every word to 'Foundations' by Kate Nash then we question what you were doing in the noughties.

The sassy love song was released in 2007 and is as funny as it is beautiful. Most people are reminded of some sort of terrible relationship whenever they hear the song, but its upbeat nature distracts from the depressing lyrics. 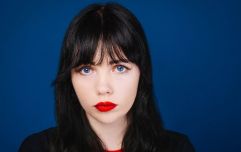 The best Irish songs from July all in one handy playlist

END_OF_DOCUMENT_TOKEN_TO_BE_REPLACED

Now the Irish rap duo Tebi Rex have put their own spin on the iconic song, and it's pretty damn good.

Both members of their duo spit their own unique verses that seamlessly fit in to the tune of the song.

Enough talking about it, have a listen for yourself here:

Kate Nash herself certainly thinks so. She took to Twitter to voice her approval of the song.

Tebi Rex discussed how nervous they were that Nash wouldn't like it, so it must have been quite a relief to see such high praise from the writer of the song.

We actually stopped last night before we released this and thought “..what if she hates it..” 😶

To hear more of their music, and to keep up to date with any upcoming live performances, you can follow Tebi Rex on Twitter here.

popular
Claire Byrne was having absolutely none of Nigel Farage's claims on Monday night
Netflix has revealed the release date for new episodes of Ozark
An asylum seeker in Cork is on hunger strike to attempt to remain in Ireland
An underrated Denzel Washington thriller is among the movies on TV tonight
Confusion reigns over social distancing element to nightclub reopening plan
The 100 greatest TV shows of the 21st century have been revealed
Forest Whitaker's intense Oscar-winning role is among the movies on TV tonight
You may also like
4 weeks ago
Fatboy Slim announces two major Irish shows for 2022
1 month ago
JOE’s Song Of The Day #911 – Three Underneath ‘Sun May Glow’
1 month ago
Ed Sheeran announces three Irish shows as part of major new tour
1 month ago
90s legends Vengaboys, Atomic Kitten and 2 Unlimited to play huge show in Dublin next month
1 month ago
The 500 best songs of all time have been revealed
1 month ago
Alanis Morissette criticises "salacious" new documentary about her
Next Page