The court will start work on deciding how much in damages Katy Perry must pay.

A US court has ruled that Katy Perry has copied her 2013 song 'Dark Horse' from a Christian rap song.

'Dark Horse' is one of Perry's biggest hits, boasting a healthy 2.6 BILLION views on YouTube, but the court has decided that it is too similar to a song called 'Joyful Noise' by a Christian rap group called Flame. 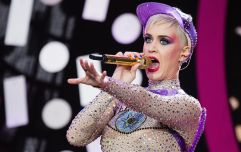 END_OF_DOCUMENT_TOKEN_TO_BE_REPLACED

According to the BBC, during the trial, Katy's team described the beat of both songs as "commonplace", arguing that because of that, Flame could not claim copyright.

"They're trying to own basic building blocks of music, the alphabet of music that should be available to everyone," said Katy's lawyer Christine Lepera during her closing arguments in court last week.

But lawyers representing Flame claimed that Katy and her team had "copied an important part", and also cited the fact that Perry herself used to be a Christian artist.

The court will now start work on deciding how much in damages Katy Perry must pay.

What do you reckon? Do they sound similar?

And here's the Christian rap song:

Clip via Radial by The Orchard

Certainly not identical, if you ask us, but you can kind of hear a slight similarity.

popular
Very popular US fast food chain planning to open in Ireland
20 years ago, one of the best sci-fi movies of the 21st century was a box-office bomb
Katherine Ryan says famous TV star is a ‘predator’ and everyone in industry knows
The JOE Movie Quiz: Week 181
Surprise frontrunner emerges as potential next James Bond as producers 'love him'
QUIZ: Only the sharpest will get 100% in this General Knowledge test
QUIZ: JOE's Big News Of The Day Quiz #19
You may also like
6 years ago
Katy Perry stripped naked in an attempt to get Americans to vote this November
6 years ago
This man got catfished into thinking he was dating Katy Perry for 6 years
8 years ago
Pic: Katy Perry's looking very well on the cover of this month's GQ
9 years ago
Video: Famous musicians read mean tweets about themselves
9 years ago
So are you heading to Ballinspittle to see Katy Perry this weekend?
2 months ago
The JOE Music Quiz: Week 122
Next Page