Picture This, Wild Youth and Gavin James all feature on the all-Irish CD.

The newly composed piece – curated by Conradh na Gaeilge, Raidió Rí-Rá and RTÉ 2FM radio presenter Eoghan McDermott – features a compilation of some of the biggest songs of this year recorded by their original artists through the Irish language.

END_OF_DOCUMENT_TOKEN_TO_BE_REPLACED

The album includes songs as Gaeilge from Picture This, Kodaline, Wheatus and many others as well as a vocal introduction from Saoirse Ronan and Macklemore.

350,000 copies of the album have been sent to post-primary students all over the country to help them celebrate the national tongue during Bliain na Gaeilge.

"Myself and Steve [Garrigan, singer] started the band in the Gaeltacht, so we've always had a deep love and affinity for the language," Mark Prendergast from Kodaline commented at the launch.

"We were delighted to be involved in CEOL this year; the scale of the album and the calibre of other artists involved make it one of the most exciting things to happen to the language in a long time." 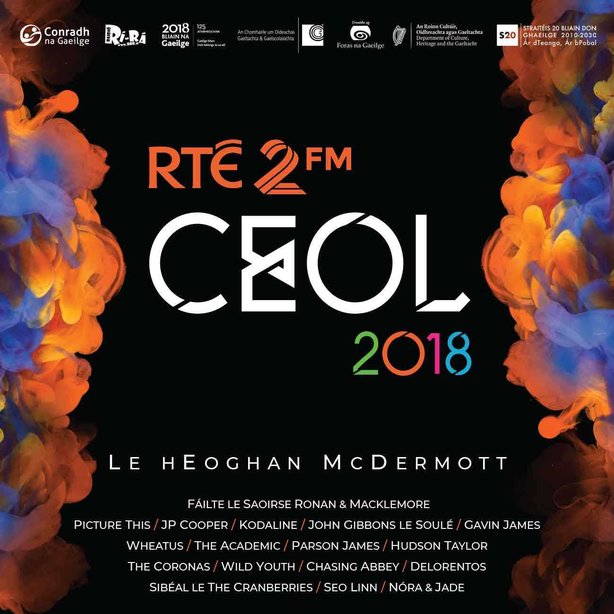 END_OF_DOCUMENT_TOKEN_TO_BE_REPLACED

"We love taking part in CEOL and we get a huge reaction when we sing one of our songs as Gaeilge anywhere in the world - people really connect with them," Danny O'Reilly, frontman of The Coronas said on the CD's release.

"I hope that our song 'Nílimid Bréagach (We Couldn't Fake It)' on CEOL 2018 and all the other amazing tracks on the album will inspire people to use more Irish especially this year during Bliain na Gaeilge."