Can it get more Irish?

Pale skin and green fields are just two of the things that make our country great (or just grand, really) and this video has it all.

An Irishman named Dan and his friend and film student Sławek, decided to recreated Rihanna's 'Stay' video and it's every bit as compelling as it sounds.

To jog your memory, here's the original.

But to put a twist on it, Dan himself hopped in the bath in the middle of the open field. 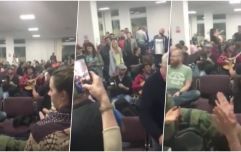 END_OF_DOCUMENT_TOKEN_TO_BE_REPLACED

Speaking about it, he said: "Sławek approached me and Louise and asked if we'd like to remake this Rihanna video where they flip the genders and give it a different spin, by replacing the sensual Rihanna with a hairy Westmeath man and replacing the background male character with a stronger female one."

He added: "We had a lot of craic making the video. I had to sit in a bathtub outside for two hours while [my friend] brought up kettles of water to keep me warm!"

Dan, and the director of the video, Sławek, have just launched their new YouTube channel, so expect to see many more videos like this.

popular
Conor Mcgregor hit by car ‘at full speed’ while cycling
New Netflix series deserves to be as big as Stranger Things
The JOE Friday Pub Quiz: Week 331
Couple left mortified after best man delivers incredible punchline during speech
QUIZ: JOE's Big News Of The Day Quiz #39
BBC apologises after calling Paul Mescal 'British' in Oscar coverage
All of the new Netflix movies and shows arriving in February
You may also like
1 month ago
Irish tourist dies after falling from moving train in Thailand
7 months ago
Irish man heading to Love Island villa as contestants are announced
9 months ago
Biden misspoke because he is Irish, says former CIA director on CNN
10 months ago
QUIZ: How well do you remember your primary school Irish?
10 months ago
QUIZ: Can you name every Irish Oscar winner?
10 months ago
PERSONALITY TEST: What percent Irish are you?
Next Page