The Metallica drummer clearly knows a good thing when he hears it.

Lars Ulrich, Metallica's charismatic drummer, has sung the praises of Dublin band Otherkin on his podcast 'It's Electric' for Apple Music's Beats 1 station.

"We have a duty to show off insane riffs when they show up... (sings along)... come on, can we all have a group bang?" he told his hosts. "We're just spazzing out over Otherkin from Dublin, Ireland." 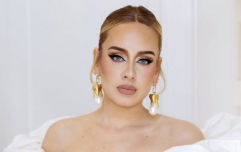 END_OF_DOCUMENT_TOKEN_TO_BE_REPLACED

What follows is something we think is an Irish accent from Ulrich's English co-host, but if you can get past the casual stereotyping you'll hear a lot of praise for the Dublin group.

"I'm fuckin' inspired," added Ulrich as he played 'Yeah, I Know' from the band's The New Vice EP.

"It's so cool that there's so much cool stuff happening all over the world."

popular
Here's how to make €9-11 on Revolut in just a few minutes
Green Party representative calls for a temporary ban of stag and hen parties in Ireland
Pop Idol star Darius Campbell Danesh has died, aged 41
Off-duty Garda arrested in Tipperary on suspicion of drink driving
QUIZ: You won't be able to correctly guess the meaning of all these words
Murder investigation launched following death of 75-year-old woman in Kerry
Dublin Bus passenger assaulted in suspected homophobic attack
You may also like
3 years ago
LISTEN: Calvin Harris drops surprise mini-EP with former Fifth Harmony singer
4 years ago
Shotty Horroh's new track 'Shudehill' is what would happen if Liam Gallagher was a rapper
4 years ago
The original Smashing Pumpkins are back with a bang after 18-year absence
5 years ago
LISTEN: The Script release new single 'Rain', their first new music in three years
5 years ago
VIDEO: Irish duo's stunning cover of one of 13 Reasons Why's most pivotal songs
5 years ago
WATCH: An exclusive first look at the new video from Damien Dempsey, 'Soulsun'
Next Page