Michael Jackson fan clubs are suing his accusers for €1 each.

Wade Robson and James Safechuck, who featured in the 2019 documentary Leaving Neverland, are being sued by a group of Michael Jackson fan clubs based in France.

The two-part documentary features both men and their families, who detail long-term incidents of abuse perpetrated by Jackson against them. The fan groups have filed a suit for defamation. 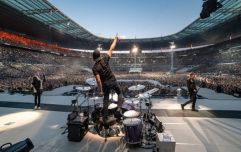 Metallica 2019: A curious corporate beast that still delivers when it counts

END_OF_DOCUMENT_TOKEN_TO_BE_REPLACED

The Michel Jackson Community, the MJ Street and On the Line groups are suing the men in Orleans, northern France. They are being represented by Emmanuel Ludot. The fan groups are seeking symbolic damages of €1 each.

They claim that in the wake of Dan Reed's Leaving Neverland - which aired in France - radio stations have stopped playing his songs and shops have stopped selling his merchandise.

It is the second time French fan clubs for Jackson have taken such a suit. They successfully sued Dr. Conrad Murray - Jackson's private physician - for his role in the pop-star's 2009 death. In that instance, they also sued for just €1. Murray was also sentenced for four years in prison for administering the fatal dose of the drug that killed Jackson.

A judgment in latest suit will be rendered on 4 October.

Unlike countries such as Ireland, the United Kingdom and the United States, where it is legally impossible to defame the dead, France allows for suits to be filed on behalf of the dead.

The Jackson estate provided a statement to the New York Post, confirming that it supports the suit, saying it is "in full support of Mr Ludot's efforts on behalf of Michael and his beloved fans in France and across the globe that the truth shall ultimately prevail".

The Big Reviewski || JOE · The Big Reviewski with Dune, a mini-Hangover reunion & the best of Timothée Chalamet
popular
PICS: The man with the biggest penis in the world has one unbelievable problem with it
Report: Crew left Alec Baldwin film set in protest before fatal shooting
9 of the best horror movies on Netflix right now
The 50 most iconic songs of all time* have been revealed
The JOE Friday Pub Quiz: Week 266
The JOE Music Quiz: Week 78
QUIZ: Can you name all the countries beginning with L?
You may also like
1 week ago
France to ban plastic packaging for fruit and vegetables from January 2022
1 month ago
Marks & Spencer to pull 800 lines from Irish stores
3 months ago
France to outlaw shredding and gassing of male chicks by 2022
4 months ago
Irish woman tragically drowns in the south of France
10 months ago
“Hugely exciting” new ferry route from Rosslare to Dunkirk to begin in January
11 months ago
Paul Pogba releases powerful statement in response to 'fake news' from The Sun
Next Page