The entire hip-hop community has paid tribute to the late rapper.

Grammy-nominated rapper Nipsey Hussle, real name Ermias Ashgedom, was killed in a shooting outside his clothing store in Los Angeles on Sunday afternoon.

Two other men were shot in the incident, with one currently being treated at the hospital, while the other reportedly denied treatment. 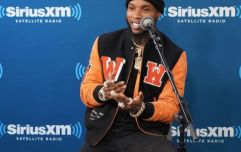 END_OF_DOCUMENT_TOKEN_TO_BE_REPLACED

Nipsey Hussle's debut studio album, Victory Lap, was nominated for Best Rap Album at this year's Grammy Awards, and he has had featured on songs with some of the biggest artists.

Since Ashgedom's death was announced, some of the biggest names in music and sport have taken to social media to pay tribute to the 33-year-old.

Just spoke with you the other day on text bro! Telling you how proud I was of you and how I was gone get you to more Laker games next season. Been A Stand Up dude from Day 1. May you rest in PARADISE Young King ?‼️‼️‼️‼️‼️ This One Hurts Big Time!

Shocked by hearing this news man. The man had a whole vision and was just about to enjoy all the work he had put in.. this is sad man ?

Fuck. My whole energy is just at a low right now hearing this. We just linked for the first time in years and said we were gonna do a new song this summer cause it had been too long. You were having the best run and I was so happy watching from distance fam nobody ever talks down on your name you were a real one to your people and to the rest of us. I’m only doing this here cause I want the world to know I saw you as a man of respect and a don. Rest easy my g.

Nipsey you a legend. I respect and admire your career path and what you did for the neighborhood. My heart broke today when I saw the news. I’m praying for your loved ones. This was sposed to be the year we got one in. God had bigger plans for you 🙏🏿

This doesn’t make any sense! My spirit is shaken by this! Dear God may His spirit Rest In Peace and May You grant divine comfort to all his loved ones! 💔🙏🏿
I’m so sorry this happened to you @nipseyhussle pic.twitter.com/rKZ2agxm2a

Just got to know you! Rest in Paradise ?? @nipseyhussle

popular
Trump claims nobody has done more for the black community, with the “possible exception” of Abraham Lincoln
Recall issued on hand sanitiser used in Irish schools due to public health concerns
Guinness announces launch of Guinness 0.0, “the Guinness with everything, except alcohol”
Here's the lineup for this week's episode of The Late Late Show
Diageo confirm Guinness cans will temporarily no longer have the floating widget
Line Of Duty cast join Celebrity Gogglebox for Stand Up To Cancer
Here's Week 54 of JOE's 19 in 90 quickfire quiz
You may also like
18 hours ago
Investigation launched into discovery of woman’s body and unexplained death of infant boy in Dublin
21 hours ago
Woman in court in connection with the identifying of boy found guilty of Ana Kriégel on social media
23 hours ago
Pedestrian dies after being stuck by a car in Roscommon
1 day ago
Appeal for witnesses after two teenagers robbed and assaulted in Dublin
1 day ago
Teenager dies following hit and run in Louth
5 days ago
Man arrested after stabbing in Dublin
Next Page