"Liverpool fans are a bit weird."

After winning their first three league games - scoring seven goals and conceding none in the process - Liverpool fans are right to feel incredibly optimistic about the season ahead because the Reds are currently sitting on top of the Premier League.

Granted, for the last 28 years, we've all heard that 'this year will be their year' but there's a genuine sense of optimism around Anfield as Klopp's shrewd signings have really bedded in quickly, with the rest of the squad that reached last year's Champions League final. 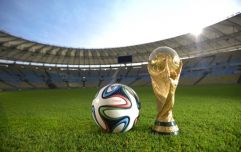 END_OF_DOCUMENT_TOKEN_TO_BE_REPLACED

This being said, Manchester City are Manchester City and Guardiola's side finished a staggering 25 points ahead of the 'Pool last season. However, we all remember what happened when Liverpool absolutely dismantled City in the Champions League quarter-finals.

On that note, you might argue that Noel Gallagher still holds a little bit of resentment towards The Reds about that result. During a recent interview with talkSPORT, the guitarist was asked how Liverpool fans treat him when he goes to Merseyside.

“Liverpool fans are a bit weird. They get over-emotional. They’re like the Queen Mother, Liverpool fans, aren’t they? They think everybody loves them. They are kind of a little bit deluded," he said

Gallagher added that his band, the High Flying Birds, have three Liverpool fans in it and that he gets a real kick out of seeing Liverpool's title dreams turn to ashes every season.

“It’s great watching the meltdown around about March. Particularly in the Champions League Final – we were on stage while it was on and there was a couple of Liverpool fans. I could see them kind of dying as the gig went on. I must say – after they smashed up our team coach in the quarter-final – I think I derived as much pleasure from that as I did from winning the league,” he said.

Take a look at Noel looking back in anger here.

‘Liverpool fans are like the Queen Mother, they think everyone loves them.'@NoelGallagher was in brilliant form on @SportsBreakfast! 😂😂 pic.twitter.com/MCjLA3AumH

House of Rugby Ireland · Quinn Roux on finding a home in Ireland and Mike McCarthy brings the absolute HEAT!
popular
Cabinet to decide on €91m vaccination deal
Man arrested and charged for breaching Covid regulations in Kildare
QUIZ: Name all the countries of the EU that contain 2 vowels or less
QUIZ: Can you name all the teams in the NBA from their locations?
Status Yellow rainfall warning issued for 11 counties
INTO calls on government to reconsider plans to partially open schools
OFFICIAL: Peaky Blinders will end after the sixth season
You may also like
4 days ago
A documentary about Pelé is coming to Netflix next month
6 days ago
Mum's anger at state of £30 free school meals package in the UK
2 weeks ago
UK records highest daily total of new Covid-19 cases
3 weeks ago
Everton v Man City tonight postponed due to coronavirus outbreak
3 weeks ago
Paul Merson rants about how Leeds fans should be furious at 'Bielsa ball'
1 month ago
EA Sports respond to 'baseless' lawsuit over alleged scripting in FIFA 21
Next Page