He recently won one of the biggest awards in music.

Noel Gallagher is having one hell of a 2018.

Still enjoying critical acclaim for the 2017 album Who Built The Moon?, which became the 10th chart-topping album that Noel was a part of (a feat matched by no other artist), he also recently won the 2018 Q Awards for Outstanding Contribution to Music, as well as the award for Best Solo Artist. 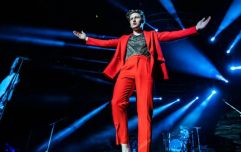 Picture This announce major gig in Killarney just before Christmas

END_OF_DOCUMENT_TOKEN_TO_BE_REPLACED

So now is as good a time as any to celebrate with a bit of a world tour!

One of the stops will bring him to Malahide Castle on Sunday 16 June 2019, with special guests on the day confirmed to be Doves, DMA'S and Blossoms.

Tickets go on sale at 9am on Thursday 6 December, priced €49.90 including booking fee and available from the usual outlets.

Hopefully it will be even a fraction as great as when he performed at Electric Picnic a few years back...

popular
QUIZ: Is your General Knowledge up to scratch?
The 50 most iconic songs of all time* have been revealed
QUIZ: Can you identify which of these countries have the colour white in their flag?
The JOE Music Quiz: Week 57
The JOE Friday Pub Quiz: Week 243
Gardaí seize phone of Dublin publican amid Leo Varadkar leak inquiry
QUIZ: How many of these characters from The Simpsons can you name?
You may also like
6 days ago
Concerts and live events could be piloted across Ireland as early as July
2 years ago
Stevie Wonder to play Dublin gig this summer
2 years ago
Hermitage Green announce major Limerick show for this summer
2 years ago
Mumford & Sons add extra Irish date due to demand
2 years ago
Lewis Capaldi added to Walking On Cars' Cork summer headliner
2 years ago
'Save Tonight' singer Eagle-Eye Cherry is returning to Ireland for the first time in 20 years
Next Page