Katy Perry played the Pyramid Stage at Glastonbury on Saturday. By all accounts, it was a storming set, glitter cannons, extravagant choreography and dancing giant eyeballs. It even ended with her crowd-surfing.

By all accounts, it was a storming set; glitter cannons, extravagant choreography, and dancing giant eyeballs. It even ended with her crowd-surfing. 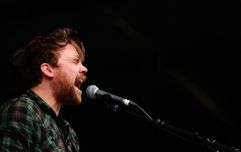 END_OF_DOCUMENT_TOKEN_TO_BE_REPLACED

However, she didn’t go down perfectly with everyone - especially the Scottish contingent watching along at home. At one point, she called out to the crowd and said:

"I can see all of you. Even that security guard in the neon. Way in the back by that blue flag with the X."

That ‘blue flag with the X’ wa, of course, the Scottish flag, the Saltire - and more than a few Scots were very disappointed to discover she didn’t recognise it.

@katyperry - the blue flag with the white X is Scottish. We're Scottish. Scotland is a separate country. Wiki is your friend.

@katyperry I'm assuming u didn't pass Geography..."the blue flag with the X" AKA the Scotland flag 😂😂😂

And of course, there were a few Groundkeeper Willie memes.

@katyperry The blue flag with the X would be the Scottish flag. #ayeordie #saltire #Glastonbury2017 #prepforstage #scotland pic.twitter.com/tulfqn1PzU

@katyperry the blue flag with the white cross you saw faraway is the Scottish Flag #Glastonbury2017 #PyramidStage pic.twitter.com/wO2G57lp6M

Advertisement
popular
New car-free town with population of 85,000 set to be built in Dublin
Elderly Irish man stabbed to death on mobility scooter in London
Galway City Council street cleaners claim Lotto jackpot worth over €5.5 million
Here's how to make €9-11 on Revolut in just a few minutes
QUIZ: Can you name all the countries beginning with A?
Articulated lorry driver in his 20s dies in Tyrone
A terrific '90s crime drama is among the movies on TV tonight
You may also like
4 months ago
Scottish Parliament official dies during rugby game in Dublin
11 months ago
Boris Johnson's plan to build tunnel between Northern Ireland and Scotland reportedly "dead"
1 year ago
64 new Covid-19 deaths reported in Scotland
2 years ago
Three people dead after train crash in Scotland
2 years ago
UK government revisiting the idea of a bridge between Scotland and Northern Ireland
2 years ago
Three people dead following stabbing incident in Glasgow
Next Page