Just when we thought Paul Mescal couldn't get any cooler...

Paul Mescal, Irishman and breakout star of Normal People, has added yet another feather to his cap by starring in the music video for 'Scarlet' by rock 'n roll legends The Rolling Stones. Just

The video shows Mescal, 24, drunkenly dancing along to the track while in a video that he apparently intends to send to his unrequited lover (the eponymous 'Scarlet'). Kind of like Christopher Walken in Weapon Of Choice but drunker and sadder. 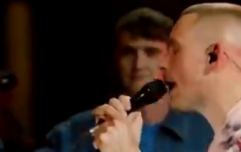 END_OF_DOCUMENT_TOKEN_TO_BE_REPLACED

If he hadn't been so damn good in Normal People, we'd say this is our favourite Mescal performance yet. It does, however, leapfrog the Ballyhaunis ad into second place.

We'd also like to note how appropriate the name of the song is, as we have all engaged in this kind of deeply scarlet behaviour before.

You can check out the video below and, in fairness, it's kind of a banger.

Clip via The Rolling Stones

House of Rugby Ireland · Quinn Roux on finding a home in Ireland and Mike McCarthy brings the absolute HEAT!
popular
Aodhán Ó Ríordáin passionately calls out Norma Foley in the Dáil
Joe Biden has removed a bust of Winston Churchill from the Oval Office
The full list of all the new shows and movies coming to Netflix in February
Here's the lineup for The Late Late Show this week
Make your own Bernie Sanders meme in any location with this website
Snow and ice warning issued for seven counties
10 prequels that are actually better than the movies that came before
You may also like
4 months ago
The Deceived, starring Paul Mescal and Emmett J Scanlan, starts on Virgin Media One tonight
4 months ago
Paul Mescal says any Emmy recognition should be shared with co-star Daisy Edgar-Jones
5 months ago
WATCH: Paul Mescal tests The Young Offenders on their friendship
5 months ago
The JOE Movie Quiz: Week 64
5 months ago
Irish actor Paul Mescal nominated for an Emmy for Normal People
6 months ago
First look at the new psychological thriller series The Deceived, starring Paul Mescal
Next Page