LISTEN: It isn't difficult to figure out what Pet Shop Boys' new song is about

Actually, it's harder to figure out what it ISN'T about...

Pet Shop Boys have never been afraid to get political or tackle particularly topical subjects.

Plus their last two albums have been two of the most-slept-on, secretly-brilliant pop albums of the last decade, and if you don't believe us, go check out tracks like 'Happiness', 'Say It To Me', or 'Vocal'.

All bangers, all of the time.

Anyways, they're back again with a new track, and once you see that title, it is clear they're back it satire territory, and it is pretty obvious the targets they're taking on...

Now, they don't specifically say the words "Brexit", "Trump", or "influencers", but you just have to pay even a passing amount of attention to the lyrics to grasp the fact that PSB have decided to take on some of the big topics of today.

"We need a leader who knows that money means class / With an eye for a peach perfect piece of ass / Not a total dumb cluck, just one of the guys / Let's give stupidity a price." 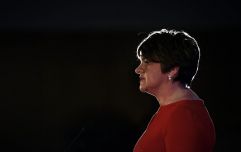 The only Irish Brexit song you'll need to hear this Christmas

END_OF_DOCUMENT_TOKEN_TO_BE_REPLACED

Front-man Neil Tennant told The Guardian a few months back during an interview that "I wouldn’t write a song called Second Referendum Now, even though I think there should be one. We have written a song called 'Give Stupidity a Chance' which is a satire. It’s close to a protest song, but it’s also funny."

Or, as a Popjustice put it:

Also a trumpbanger, what a bargain