Pic: Check out this deadly Jimi Hendrix-inspired mural to Rory Gallagher in Cork

One of the most famous quotes about the Irish musician is here for all to see...

Rory Gallagher is one of the legendary musicians of our time for a number of reasons. Mostly because of his talent on the guitar which influenced countless people to take up the instrument but also because of his commercial success having sold around 30 million albums worldwide.

He was a real musician's musician and his death in 1995 saw tributes pour in from everyone from Brian May to Jimmy Page but throughout his career he received high praise from all over but the most famous one of all came from Jimi Hendrix.

END_OF_DOCUMENT_TOKEN_TO_BE_REPLACED

In an interview with Rolling Stone, Hendrix was asked 'How does it feel to be the greatest guitarist in the world?' He answered,  'I don’t know, go ask Rory Gallagher.'

That amazing comment has now been reproduced on a mural in Cork which was spotted by RTÉ reporter Jennie O'Sullivan, you can check it out on South Main Street... 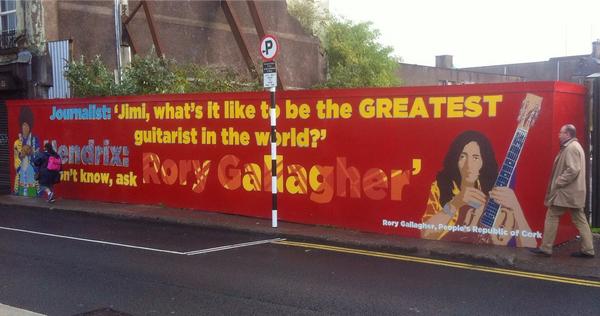