Never one to beat around the bush is our Sinead.

As well as being famous for being one of the greatest singers to ever come out of Ireland (check out her performance of Foggy Dew before Conor McGregor's fight against Chad Mendes) Sinead O'Connor is also well-known for never being afraid to tell it as it is.

Some of Sinead's public pronouncements have courted controversy in the past and her latest one, a rant at Kim Kardashian and Rolling Stone magazine, is no different.

END_OF_DOCUMENT_TOKEN_TO_BE_REPLACED

Rolling Stone, of course, has probably been the biggest music magazine in the world for decades and getting onto the front cover is a big deal indeed.

Kim Kardashian, renowned songstress that she is of course, has somehow made her way onto this month's cover and needless to say, Sinead was not impressed. In fairness, she wasn't the only one. 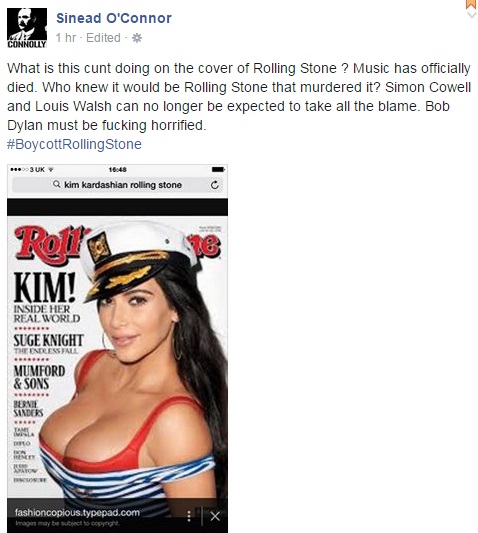 That sure told you, Kim, although no doubt Kanye will have something ridiculous to bite back with in response.