Here are the most popular songs in Ireland for 2018

George Ezra is definitely riding shotgun because when it comes to the biggest songs in Ireland for 2018, the English singer is out in front.

Shotgun was the most popular single of the year in Ireland across all formats - digital download, audio stream and video stream - and the No. 1 single accumulated combined sales of 114,000.

END_OF_DOCUMENT_TOKEN_TO_BE_REPLACED

That's not the only Ezra release in the top 10 though because Paradise - a better track in this writer's humble opinion - charted at number 5.

Those three gigs of his  in Ireland will be absolutely wedged!

Elsewhere, 2018 was a good year for Dua Lipa because she had two 2018 chart-toppers One Kiss (with Calvin Harris) and IDGAF in the top 5.

The only other artists with three songs in the Top 40 are Post Malone and Ed Sheeran (he's always there). 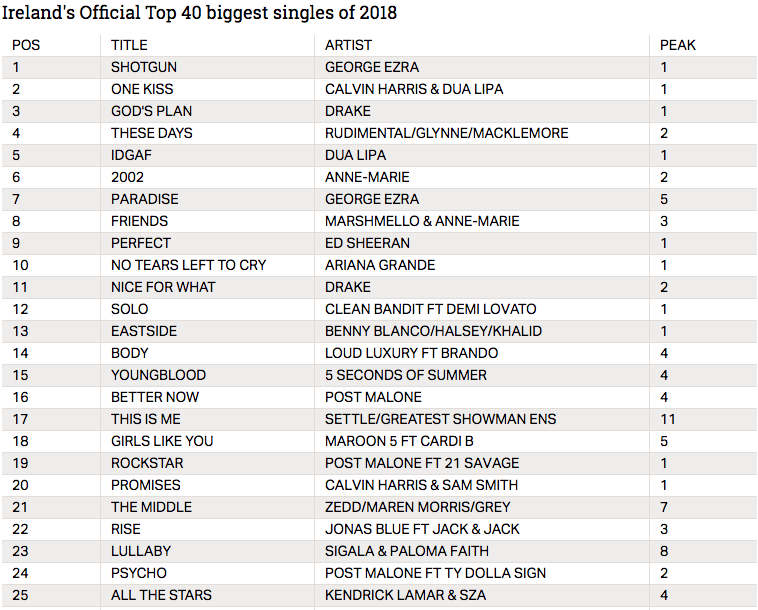 popular
Increase in passenger charges at Dublin Airport may be on the way
Netflix has just added 33 very big movies to its library
The full list of cancelled flights in and out of Dublin Airport on Monday (so far)
The long-awaited MetroLink is finally happening, for real this time, honest
Government considering giving public €200 again to assist with rising energy costs
Waterford man sentenced to three months imprisonment for operating "cruel and illegal" puppy farm
REVIEW: Thor Love and Thunder is equal parts fun and blunder
You may also like
4 days ago
The JOE Friday Pub Quiz: Week 301
5 days ago
QUIZ: Can you guess the pixelated album cover?
1 week ago
Lizzo pledges $1 million for Planned Parenthood and abortion funds
1 week ago
Dave Grohl performs for the first time since Taylor Hawkins' death
1 week ago
We've put together the ultimate playlist for Pride Weekend 2022
2 weeks ago
Acclaimed traditional Irish guitarist Dennis Cahill has died, aged 68
Next Page