Frusciante left the band over 10 years ago.

Rock legends Red Hot Chili Peppers have announced that John Frusciante is rejoining the band, over a decade after he quit.

The guitarist left the band over 10 years ago, and was subsequently replaced by Josh Klinghoffer. 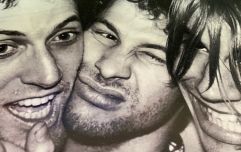 END_OF_DOCUMENT_TOKEN_TO_BE_REPLACED

But the Chilis announced on Sunday night that the guitarist is now back in the picture, and that Klinghoffer has exited the band.

An Instagram post uploaded by the band said: "The Red Hot Chili Peppers announce that we are parting ways with our guitarist of the past ten years, Josh Klinghoffer.

"Josh is a beautiful musician who we respect and love. We are deeply grateful for our time with him, and the countless gifts he shared with us.

"We also announce, with great excitement and full hearts, that John Frusciante is rejoining our group. Thank you."

Take a look at the band's statement below:

Social media has had a strong reaction to the news, with fans of the band delighted to see Frusciante back in the band.


The Architects Of Business || JOE · "It doesn't get bigger than this for me" - Irish scientist wins EY Entrepreneur of the Year 2020
popular
Weather advisory issued for all of Ireland, with snow on the cards
QUIZ: Can you guess these European countries from their outlines?
Here’s how you can get 20 bets for €2* for the next EuroMillions jackpot
The JOE Movie Quiz: Week 80
Record Christmas bonuses worth €390 million to be paid to 1.6 million recipients next week
EA Sports respond to 'baseless' lawsuit over alleged scripting in FIFA 21
Liam Neeson to narrate landmark two-part series marking the 175th anniversary of the Great Famine
You may also like
3 years ago
WATCH: The 'All I Want For Christmas' Carpool Karaoke with Mariah Carey, Adele, Chris Martin, Elton John, Red Hot Chilli Peppers & loads more is the best yet
4 years ago
VIDEO: Flea talks about new Red Hot Chili Peppers' album cover in a JOE.ie exclusive
6 years ago
Video: Will Ferrell and Chad Smith had their long-awaited drum-off on Jimmy Fallon last night
7 years ago
Put a new spin on some of your favourite songs with this incredibly cool app
1 month ago
Rapper Tory Lanez charged with shooting Megan Thee Stallion
1 month ago
Jon Bon Jovi makes absolutely wild statement about Bono's childhood
Next Page