As bizarre a headline as we have ever written.

Have you ever had a dream, woken up and immediately wished you could see it again?

Not just a normal dream. Something that you know you'll never get to see, purely because of how bizarre it is.

Well, whatever it is, do not give up just yet.

Blindboy, of Rubberbandits fame, once had a dream where Hozier covered the song 'Saint Dominic's Preview' by Van Morrison.

I also once dreamt that Hozier covered this. It was brilliant. I can't get it out of my head, even though it never happened. https://t.co/FppBxLF5BJ

Hozier caught wind of this (over a year later, it seems), and made Blindboy's dream come true, literally, by posting a cover of the song on his Instagram story.

Brayception, I once had a dream where @Hozier did a cover of St Dominic’s preview by Van Morrison, so he did a cover, based on my dream pic.twitter.com/5HfbmDRRwR 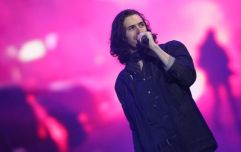 END_OF_DOCUMENT_TOKEN_TO_BE_REPLACED

And like we said, this is all quite a strange experience, but just listen to how incredible the Bray man sounds.

We would be very interested in seeing Hozier and Blindboy collaborate in some way again. Maybe he'll appear on his podcast one day, or perhaps they'll do a song together.

A Hozier cover of 'Horse Outside' would go down a treat.


popular
Here are Ireland’s favourite takeaways, as per the National Takeaway Awards
QUIZ: Week 16 of JOE's 19 in 90 quickfire quiz is here
Met Éireann forecasts risk of sleet and possibly snow in parts of Ireland this weekend
Maria Bailey has announced she will not run in the general election
New documentary series examines three brutal murders and a mysterious satanic cult
Terry Jones from Monty Python has died, aged 77
Noel Rock asked for less alcoholic beer to be sent to the Mansion House just as his Fianna Fáil rival was elected Lord Mayor
You may also like
4 months ago
Hozier has announced a massive Dublin gig just in time for Christmas
4 months ago
Electric Picnic 2019 - Friday: You should see Billie Eilish in a crown
7 months ago
The Power and Glory of Dermot Kennedy
9 months ago
Digital radio station PlayIrish looks to create a community for Irish music
9 months ago
The best festivals in Northern Ireland happening this year
11 months ago
Here's who's on the Late Late and Graham Norton tonight
Next Page