The first proper summer banger has arrived, and it is a total earworm

It dropped at midnight on Friday, and we haven't been able to stop listening to it since.

Whether you love him or hate him, Pharrell Williams knows his way around a chewn.

From his co-productions when he was a part of The Neptunes (Snoop's 'Drop It Like It's Hot', Kelis' 'Milkshake', Britney's 'I'm A Slave 4 U', Justin's "Let Me Love You'), to his work as part of NERD ('Lapdance', 'She Wants To Move', 'Lemon'), to his solo production work (Robin Thicke's 'Blurred Lines', Ed Sheeran's 'Sing', Missy Elliott's 'WTF (Where They From)'), the man knows how to make you dance. 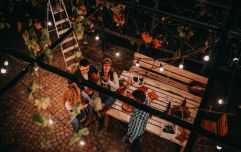 LISTEN: 20 songs for the ultimate back garden summer playlist

END_OF_DOCUMENT_TOKEN_TO_BE_REPLACED

Then there are his own singles - you might have heard of a little world-dominator by the name of 'Happy' - as well as the huge songs he's worked on with some of the best in the game and resulted in some of the biggest earworms ever created...

Well, he's back to take over the summer of 2018 too, and he's reuniting with former Fifth Harmony member Camila Cabello on their new banger 'Sangria Wine'.

Williams co-wrote Cabello's massive hit 'Havana', and they worked on 'Sangria Wine' during that same time, with Cabello performing the track during her recent US tour, and teasing that the single would be released in full just in time to soundtrack all of your BBQs, and now here we are.

Be prepared, because we're probably going to be hearing this everywhere for the next few months, so if dance-pop-samba-reggae vibes aren't you thing, then this isn't going to be for you.

popular
Netflix has just added an incredibly tense 97-minute thriller
Irish people could be treated to spectacular sights in the sky over the next few nights
Prime Video has just added 25 very big movies to its library
Eamon Ryan's mother dies in tragic accident on family holiday
Teenager airlifted to hospital after being seriously injured in Clare tractor crash
The Sweatiest Movie Quiz Of All Time
Four Irish food businesses were served with closure orders in July
You may also like
3 weeks ago
UK may hit "ferocious" 41C as hottest day on record expected to be smashed
1 month ago
Yesterday was the hottest day of the year, and it's set to be even hotter today
1 month ago
Temperatures to hit up to 26 degrees in Ireland as UK braces itself for hottest weather in 40 years
2 months ago
COMPETITION: WIN 1 of 10 €50 Iceland Foods vouchers to stock up on some tasty BBQ bites
2 months ago
WHO issues monkeypox warning ahead of festival season
2 months ago
Watch out! A new BBQ range is coming your way and it's about to get fiery
Next Page