The singer took to Facebook on Friday night to respond to Hall’s threat of a $5 million defamation lawsuit.

Sinéad Ó’Connor has delivered a firm response to Arsenio Hall after it emerged that the entertainer was planning on suing O’Connor for $5 million for claims she made about Hall, whom, she said, supplied recently deceased music legend Prince with drugs “for decades”.

She also claimed that Hall once spiked her drink years ago at Eddie Murphy’s house.

END_OF_DOCUMENT_TOKEN_TO_BE_REPLACED

Responding to those claims, representatives of Hall’s announced that they would take legal action against O’Connor, a lawsuit worth €5 million for what they claimed were “outlandish defamatory lies” about their client.

O’Connor has subsequently hit back at Hall in a no-holds-barred post on her Facebook page, saying she is looking forward to “how hilarious it will be watching him trying to prove me wrong”.

The statement on her Facebook page also referred to a DEA investigation into Prince's drug use and ended with a line addressed to Hall which read: “He can suck my d**k. That is if he isn't too busy sucking someone else's d**k. : ) 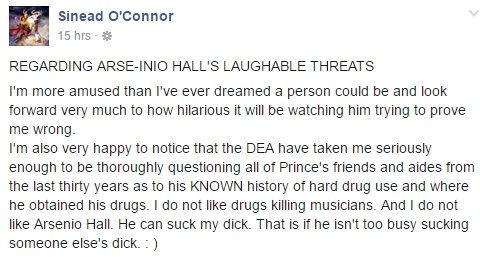 popular
Met Éireann issues Status Yellow rain warnings for five counties
Met Éireann issues weather warning for three counties
Paul Reid announces decision to step down as HSE boss with a "heavy heart"
Rental availability at "extraordinarily low level" as house prices continue to rise
QUIZ: Can you conquer this delightfully difficult General Knowledge Quiz?
Aer Lingus apologises for multiple cancelled flights to and from Dublin Airport
QUIZ: Can you identify these Irish towns on a map?
You may also like
3 days ago
We've put together the ultimate playlist for Pride Weekend 2022
5 days ago
Acclaimed traditional Irish guitarist Dennis Cahill has died, aged 68
1 week ago
The JOE Friday Pub Quiz: Week 299
1 week ago
UK lined up as host for Eurovision 2023 after organisers rule out Ukraine hosting
1 week ago
Sinéad O'Connor cancels all live dates for 2022 due to "continuing grief"
1 week ago
Joker 2: Lady Gaga reportedly in talks to play Harley Quinn in sequel
Next Page