The 10 most popular wedding songs of the last year, according to Spotify

If you've been to a wedding in the last 12 months, chances are this list will not surprise you.

Spotify has released its list of the ten most popular 'first dance' songs at weddings in the last year, and we're shocked to find that Daniel O'Donnell is nowhere to be seen.

Instead, it's the new mammy's favourite who takes top billing for that all important first, terrifying trip to the dancefloor.

Ed Sheeran, take a bow. This is the most popular first dance song in the world right now, 'Thinking Out Loud.' 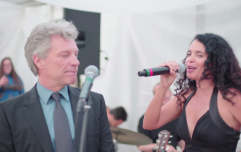 Watch Bon Jovi really, REALLY not want to sing at this wedding reception

END_OF_DOCUMENT_TOKEN_TO_BE_REPLACED

Not only that, but Spotify has also released its Top Ten reception songs.

popular
Dublin pub hit with 'about 50 or 60' fake bookings on first day of indoor service
QUIZ: How many of these famous erect landmarks can you recognise?
Met Éireann forecasts "heavy blustery showers" for this week
Jungle Cruise review: The natural successor to The Mummy and Pirates of the Caribbean
Only Murders in the Building is a must-watch for fans of true crime podcasts
QUIZ: Can you get 10/10 in this quick County Cork quiz?
Leo Varadkar confirms Ireland to overtake UK's vaccination rate in "next week or so"
You may also like
8 hours ago
CONFIRMED: Guests allowed at weddings to increase to 100 from 5 August
12 hours ago
Stephen Donnelly thinks there will be "good news on weddings today"
1 day ago
Brides-to-be to protest at Government Buildings in call to increase wedding guests to 100 people
11 months ago
All wedding guests must be gone by 11.30pm in accordance with new guidelines
1 year ago
Number of guests allowed at weddings from July likely to be "very small" says Simon Harris
1 year ago
Need a wedding venue? This one was just crowned best in Ireland
Next Page