Thanks to Pokemon Go the world is experiencing Pokefever once again.

It's just like being in 1999 again. Thousands of people all walking around obsessed with Pocket Monsters, trading stories, having laughs and just generally being pals.

We're big fans of Pokemon being back -  we're watching the cartoon series on Netflix to get the full nostalgia experience and earlier this month sent handsome man Alex Finnis out for the entire day to play Pokemon Go around London. 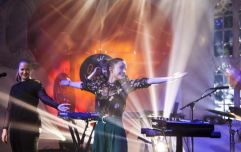 END_OF_DOCUMENT_TOKEN_TO_BE_REPLACED

Everyone is bringing Pokemon back. Including the singer behind the original theme song, Jason Paige.

Twenty years on from recording the iconic 90s tune, Paige returned to the studio to record a pitch perfect rendition of the Pokemon theme song.

Paige has been back in the news thanks the the emergence of Pokemon Go and seems to be taking everything in stride.

Talking to the New York Post, he explained how back in the 90s, he had no idea how big the Nintendo franchise would get.

"No one knew it would explode into this incredible craze," Paige tells The Post. "I didn’t really know much about Pokémon when I did the demo, other than [that] a scene in the cartoon caused a giant bout of epileptic seizures in Japan. Then they showed the clip on the news, and it caused another bout of seizures."

Spending his time between New York and Los Angeles, Paige now works as a performing artist, but still gets people approaching him from time to time in the street.

"One time, a girl, who was about 18, just screamed and fell on the ground when she met me, while her friend took pictures. The cosmic happiness of millions of people, whose childhoods were underscored by me telling them, ‘to be the best is the real reward!’ "

Cheers Jason. Thanks for recording such a great tune.

House of Rugby Ireland · Quinn Roux on finding a home in Ireland and Mike McCarthy brings the absolute HEAT!
popular
CONFIRMED: Level 5 restrictions to remain in place until 5 March
Leo Varadkar says if Ireland introduced mandatory hotel quarantine, it would have to do so for a year
QUIZ: Can you name all of these countries just from one of their cities?
Man arrested for fishing envelopes out of church collection boxes in Cork
Police called to illegal rave to find pensioners queuing for vaccine
Majority of English people 'pleased' or 'not bothered' by prospect of united Ireland
The 50 most iconic songs of all time* have been revealed
You may also like
1 month ago
QUIZ: How well do you remember the TV Shows of 2020?
2 months ago
BBC confirms 'Gavin & Stacey' will return with new episodes in future
2 months ago
Full trailer for Season 4 of The Crown shows Gillian Anderson as Margaret Thatcher
3 months ago
Gogglebox is looking for Irish people abroad for its Christmas special
3 months ago
TG4 is looking to fund five new Irish TV dramas
3 months ago
QUIZ: Name the obscure characters from The Simpsons (Part Three)
Next Page