With a new album set for release next month, The Script are gearing up for a very busy immediate future.

Having announced two major Dublin gigs as part of their upcoming European tour, the trio have moved to satisfy "phenomenal demand" by adding a third date to proceedings. 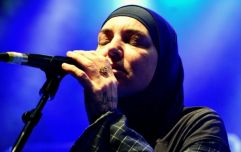 END_OF_DOCUMENT_TOKEN_TO_BE_REPLACED

So if you missed out on those first two hometown offerings, you can now catch Danny O'Donoghue and company in the 3Arena on Thursday 5 March, 2020.

Special guest on the evening will be Becky Hill, who rose to prominence following her appearance on season one of The Voice UK.

Concert promoters MCD have noted this will be the final Dublin show of this run, so it's probably a good idea to pick up tickets quick enough.

Speaking of, they're on sale right now via Ticketmaster and usual outlets, priced from €42.50.

Keep an eye on JOE for an extensive interview with Danny O'Donoghue coming soon...

popular
The JOE Friday Pub Quiz: Week 308
Controversial influencer Andrew Tate banned from Instagram and Facebook
Infant dies after being hit by jeep in Roscommon
Netflix has just added 23 very big movies to its library
Two Irish people arrested in "smuggling event" near Miami
Pilots fly over destination airport at 37,000 feet because they were both sleeping
A creepy and violent horror-thriller is among the movies on TV tonight
You may also like
3 months ago
A Late Late Toy Show musical is coming to Dublin
3 months ago
Here's how you can get your hands on tickets for the sold-out Electric Picnic
3 months ago
Ed Sheeran and Ireland – a strangely tepid love affair that somehow endures
4 months ago
Slane gigs off this year as "world class" act promised instead for 2023
8 months ago
€50 million funding allocated to entertainment sector after restrictions
8 months ago
Warning issued over high price black market Garth Brooks tickets
Next Page