VIDEO: Fatboy Slim paid a class tribute to the fans of Bohemians at his gig in Dublin

Having famous supporters isn't exactly a new phenomenon for Bohemians - Samuel L Jackson, Irvine Welsh and Johnny Logan have all declared their love for the Gypsies - but DJ Fatboy Slim has a very direct link to the clubs core supporters, the Notorious Boo Boys (N.B.B).

You may remember the memorable Dublin derby that took place this year at Dalymount Park between Bohs and Shamrock Rovers, the 3-1 win for Keith Long's side was captured in this stunning video by Copa '90, but before the match against Rovers, the N.B.B made a very special tifo that caught the attention of Norman Cook, as seen below.

@Inphosports I'd love a print / hi rez of that pic, pls could you email info to info@FatboySlim.net ? 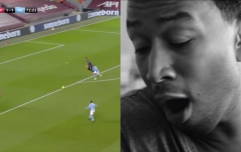 END_OF_DOCUMENT_TOKEN_TO_BE_REPLACED

The DJ was playing at the 3Arena this week along with The Coronas and Ryan Sheridan and he didn't forget to praise the efforts of the Bohemians supporters who made this very cool tifo. Take a look at the very special item that's on the video screen as he leaves the stage.

The Big Reviewski || JOE · The Big Reviewski with Dune, a mini-Hangover reunion & the best of Timothée Chalamet
popular
Alec Baldwin fatally shoots woman with prop gun on movie set
HBO announces a new Sopranos series is in the works... kind of
CONFIRMED: Nightclubs to open at 100% capacity, 11.30pm curfew has been removed
Two Gardaí assaulted during protest in Dublin City Centre
QUIZ: Can you name all the countries beginning with L?
Here's the lineup for this week's Late Late Show
"It’s obvious these guidelines were issued by Government without any meaningful consultation with the hospitality sector."
You may also like
1 week ago
The JOE Friday Pub Quiz: Week 264
1 month ago
Manchester City's Benjamin Mendy charged with four counts of rape
2 months ago
Michael Ballack’s son Emilio, 18, dies in 'quad-bike crash’
2 months ago
Five football documentaries to watch to kill time before the new Premier League season
3 months ago
Basketball Ireland Chief apologises for social media post following controversial England penalty in Euro 2021 semi-final
4 months ago
Christian Eriksen shares first update from hospital as he undergoes tests after cardiac arrest
Next Page