Video: It's the morning after the best Electric Picnic yet...

Well, that was quite something.

From first timers to Electric Picnic virgins, everybody in Stradbally had an absolute blast this week as Ireland's favourite music festival took over from the midlands.

From the headliners to the dark horses - nobody who witnessed it will forget Jack Garratt's set in a hurry, for instance - this year's event is going to live long in the memory as something like normal life resumes. 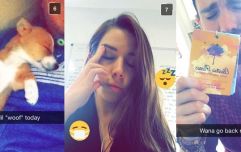 END_OF_DOCUMENT_TOKEN_TO_BE_REPLACED

Still, we have the memories and JOE was there to give you this small snapshot into life at Electric Picnic 2015.

Next year's is going to be bigger again, by the way. Only 360-odd days to go.

The Big Reviewski || JOE · The Big Reviewski with Andy Serkis, Squid Game follow-ups & the return of Succession
popular
An underrated Denzel Washington thriller is among the movies on TV tonight
PICS: The man with the biggest penis in the world has one unbelievable problem with it
The 50 most iconic songs of all time* have been revealed
Weird 'blacked out' island on Google Maps sparks wild conspiracy theories
RSV outbreak in children "more contagious than Covid", says GP
New €140 million road officially opens today, replacing one of Ireland's most dangerous roads
Colder weather ahead as polar maritime airmass settles over the country
You may also like
5 years ago
The Cheap Seats: 5 things League of Ireland fans are sick of hearing
6 years ago
VIDEO: Sexton, O'Connell and Henshaw sit down for an honest chat about the World Cup
6 years ago
JOE's Electric Picnic Roundup: Blur, George Ezra, GAA, Sam Smith, Maniac 2000 and more
6 years ago
PIC: It looks like absolutely everyone at Electric Picnic was watching Blur on the main stage last night
6 years ago
VIDEO: There’s a massive crowd watching the All-Ireland Hurling Final at Electric Picnic
6 years ago
JOE’s Highlights from Electric Picnic: Day Two
Next Page