The pop star is struggling to walk following a snakebite.

Mike Posner rose to fame all the way back in 2009 with his song 'Cooler Than Me'.

It was one of those absolute bangers that you couldn't go 30 minutes without hearing on the radio.

Since then he's had one or two other songs as big, including 'I took a pill in Ibiza', ensuring he could never given the dreaded "one-hit wonder" status.

Posner is currently taking part in a walk across the entirety of the United States, which has been cut short due to a serious snakebite.

Posner had crossed from Kansas into Colorado when he was bitten by a baby rattlesnake, which resulted in him being taken to a hospital.

He has shared a video of his rehab on Saturday evening, accompanied by the caption "Gonna rebuild with patience and equanimity."

From 24 miles per day to using this walker to get to bathroom. I’m on my way back. Gonna rebuild with patience and equanimity. pic.twitter.com/I2HYPmMO7L 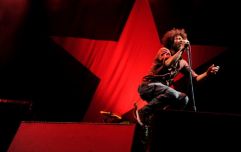 END_OF_DOCUMENT_TOKEN_TO_BE_REPLACED

"I got to the hospital and got the anti-venom in time. Shout outs to G and Mike from the chopper team and Bo and Cassie and Whitney (my nurses)."

Posner set out on his walking journey from New Jersey back in April, with his plan being to walk 20 miles a day, reaching California next month.


popular
Gardaí arrest woman (40s) in relation to the three children that were found dead in Dublin
The JOE Movie Quiz: Week 38
QUIZ: Name the missing word from these famous Dumb and Dumber quotes
Tommy Tiernan's chat with James Leonard about addiction and recovery is genuinely life-changing
The first look at the new season of Better Call Saul edges us ever closer to the Breaking Bad era
Matthew McConaughey and True Detective creator will re-team on a new murder mystery
Washington Post employees condemn decision to suspend reporter over Kobe Bryant tweets
You may also like
8 months ago
Three-eyed snake found on road in Australia
9 months ago
You can now play Snake on Google Maps
11 months ago
Indonesian police apologise after video emerges of them terrorising suspect with snake
1 year ago
PICS: Huge snake found roaming around park in Leitrim
3 years ago
WATCH: Man steals snake from store by shoving it down his pants
3 years ago
PIC: Oh hell no! Australian woman finds venomous snake hiding on her Christmas tree
Next Page