Their sense of humour has never been this dark.

U2 have shared a politically charged video for their single, 'Get Out Of Your Own Way'.

Taken from the band's fourteenth album, Songs of Experience, which was released on 1 December 2017, the track was first dropped in early November.

END_OF_DOCUMENT_TOKEN_TO_BE_REPLACED

Using stop-motion and paper, the video goes on the attack by featuring scenes of Donald Trump looking at members of the Ku Klux Klan out on the White House lawn, while also recreating as a scenic holiday postcard the shocking image of Alan Kurdi, a 3-year-old Syrian refugee who drowned.

Directed by an Israeli graffiti collective called Broken Fingaz Crew, the video is not unlike the work of Banksy in how it uses extremely dark humour to look at the current political climate.

All things considered, this is a very different side to the Dublin band.

Bono and co. also announced their US and European tour dates for the upcoming eXPERIENCE + iNNOCENCE Tour. 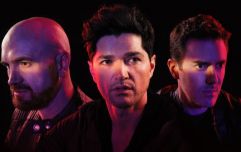 END_OF_DOCUMENT_TOKEN_TO_BE_REPLACED

The only dates they haven't announced yet are for Dublin and Belfast, which are still due to be finalised.

The UK gigs at Manchester and London take place on 19 and 23 October respectively.

Following last year’s acclaimed stadium run with The Joshua Tree Tour 2017, the eXPERIENCE + iNNOCENCE Tour will see U2 return indoors to pick up where 2015’s tour left off.

Tickets for the U2 eXPERIENCE + iNNOCENCE European Tour go on sale Friday, 26 January and there will be a public ticket limit of 4 tickets per person.

Below are the list of European dates, with gigs in Belfast and Dublin expected to be announced soon.

popular
New Netflix series looks like a must-watch for fans of Drive to Survive
The JOE Friday Pub Quiz: Week 279
The full list of all the new shows and movies coming to Netflix in February
Public urged to be wary of sophisticated Revolut scam in operation in Ireland
John Travolta's Irish accent has to be heard to be believed
The 50 most iconic songs of all time* have been revealed
Jenny Greene to leave RTÉ 2FM's Drive Time to host new show
You may also like
1 year ago
The JOE Music Quiz: Week 31 - Special U2 Edition
2 years ago
U2's Larry Mullen Jr. writes heartfelt tribute to the late, great Larry Gogan
3 years ago
Gardaí issue statement regarding road closures due to U2 gig in Dublin
3 years ago
Do we like Bono or not? Exploring one of Ireland's greatest dilemmas
3 years ago
Director of My Left Foot talks about which part of U2's history he'd focus on making a movie about
3 years ago
WATCH: U2 played a belting version of Stay (Faraway, So Close!) at their Dublin gig
Next Page