One in three parents "very concerned" over children's return to school

A survey by the Central Statistics Office (CSO) has found that one in three (32%) parents of children returning to school are "extremely" or "very" concerned about their child's safety.

The survey also found that just over 6% of parents do not intend to send their child to either pre-school, primary school, or secondary school due to their concerns over Covid-19. 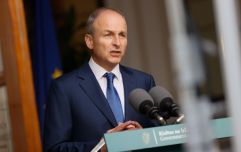 END_OF_DOCUMENT_TOKEN_TO_BE_REPLACED

The survey of 1,333 people also found that almost two in three (66.2%) respondents reported they would be "very or "somewhat likely" to avail of a Covid-19 vaccine for their school-going children if one were to become available.

Among a number of other statistics found in the report, the CSO revealed that if schools have to close again, 16.9% of female respondents with a primary school student reported that they may have to give up work, compared to 3.9% of males.

Two out of three respondents (67%) with a child going into their Leaving Certificate year (2021) reported that the school closures had a "major" or "moderate" negative impact on their child's learning.

This news comes the day after it emerged that two-thirds of Irish school principals said they have teachers with underlying health issues.

The Big Reviewski || JOE · The Big Reviewski with Ray Liotta, Goodfellas facts & Tom Hanks making us cry
popular
One of the most-anticipated movies of the last few years is finally available to watch at home this week
The JOE Friday Pub Quiz: Week 262
QUIZ: The Ultimate Movie Gangster Quiz
The 50 most iconic songs of all time* have been revealed
PICS: The man with the biggest penis in the world has one unbelievable problem with it
If you're confused about recycling, we've got some good news for you
Five of the best dates for a new bank holiday in Ireland, as decided by us
You may also like
11 hours ago
There should be more bank holidays in Ireland to meet EU standards, argues TD
12 hours ago
Tom Duffy's Circus looking to hire some clowns
14 hours ago
Bord Gáis announces increase to household energy prices due to "all-time high cost of energy"
21 hours ago
President Michael D Higgins calls for public support for 'Make Way Day'
23 hours ago
A new bank holiday may be on the way as part of this year's Budget
1 day ago
Taoiseach says he would like to see Garth Brooks play in Cork next year
Next Page