100,000 people in LA expected to be evacuated as they are in the path of a massive wildfire

At around 10pm local time (or around 6am GMT), a fire broke out near the city of Santa Paula, which is located about 60 miles from downtown Los Angeles.

Since it was first reported, the blaze has now engulfed approximately 10,000 acres of land. 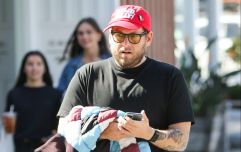 END_OF_DOCUMENT_TOKEN_TO_BE_REPLACED

The fire continues to spread towards more populated areas, and local officials are concerned that it will reach the limits of the city of Valencia by about 1am local time (or 9am GMT).

Evacuation orders have already been put in place, but they will need to be stepped up massively should the fire not be under control by the time it reaches Valencia, as that city has a population exceeding 100,000 people.

The LA Times are reporting that the fire has already resulted in at least one death, with over 260,000 in the area currently without power.

The Big Reviewski || JOE · The Big Reviewski with Dune, a mini-Hangover reunion & the best of Timothée Chalamet
popular
WhatsApp to stop working on 53 phone models, including iPhone 6
Waterford driver fined for speeding, immediately speeds away, is fined again
Three Status Yellow warnings issued as rain set to hammer the country
FREE NOW reports "200 requests a minute" on Sunday following nightclubs reopening
Paschal Donohoe confronted on the street by anti-vaccine protestors
Nightlife sector asks for two-week grace period on implementing guidelines
Urgent appeal launched for blood donations as supplies "extremely low"
You may also like
3 weeks ago
Treasury Secretary warns US government will run out of money by October 18
4 weeks ago
R Kelly convicted of racketeering in sex trafficking trial in Brooklyn
1 month ago
Dr Fauci says travel between Ireland and US will be "safe" from November
1 month ago
Comedian Norm Macdonald dies aged 61 after battle with cancer
2 months ago
US pharmacist arrested for selling dozens of vaccine cards on eBay for $10 each
3 days ago
Taoiseach calls on public to "behave" in order to avoid Covid surge
Next Page