It has emerged today that a 17-year-old girl died after collapsing at the Kodaline concert in Dublin's Marlay Park on Friday.

According to the Irish Sun on Sunday, a Garda spokesperson said that "a 17-year-old girl took ill at a concert in Marlay Park on Friday July 8. She was treated at the medical centre on site before being transferred to Tallaght Hospital where she was pronounced dead a short while later."

The Gardai are awaiting the results of an autopsy and a coroner's report to determine the nature of the investigation. 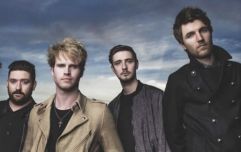 END_OF_DOCUMENT_TOKEN_TO_BE_REPLACED

A statement by organisers and promoters MCD has expressed sympathy with "the family, relatives and friends of the deceased" on behalf of themselves and the band.

The statement also said that the girl had underlying health conditions:

"During the Kodaline concert at Marlay Park a 17-year-old girl with a pre-existing medical condition became ill.

"The on-site medical team of doctors and paramedics immediately treated the young lady who was transferred to hospital by one of the on site ambulances.

popular
People want "offensive" Crown Paints advert banned after attracting hundreds of complaints
Arrest made after shop robbed at knifepoint in Dublin
Here's how to make €9-11 on Revolut in just a few minutes
QUIZ: Can you identify the famous song from the opening line?
Man arrested on suspicion of the murder of Irish man in London
New car-free town with population of 85,000 set to be built in Dublin
QUIZ: Can you name all the countries beginning with A?
You may also like
10 months ago
Kodaline's Steve Garrigan: "Music has always been that safe place"
10 months ago
Here's the line-up for this week's episode of The Late Late Show
2 years ago
The JOE Music Quiz: Week 1
2 years ago
WATCH: Kodaline ask for help to find this busker so he can join them on stage at their next gig
2 years ago
JOE's Song Of The Day #866 - Kodaline 'Wherever You Are'
3 years ago
Kodaline announce two Dublin gigs for next summer
Next Page