They say the jobs will be necessary to operate Ryanair’s 210 new Boeing 737 "Gamechanger aircraft".

5,000 new pilot and cabin crew jobs are set to be created over the next five years as airline giant Ryanair has committed to investing €50M in a new Dublin simulator and training centre.

The airline announced a new agreement with Airline Flight Academy (AFA) at the opening of a brand new €50m Aviation Training Centre in Santry, close to Dublin Airport on Tuesday.

END_OF_DOCUMENT_TOKEN_TO_BE_REPLACED

The company said that access to the new facilities will enable Ryanair to recruit and train over 5,000 new pilots, cabin crew, engineers and ground operations professionals over the next five years.

Ryanair said that the jobs will be necessary for the operation of Ryanair’s 210 new Boeing 737 "Gamechanger aircraft", which it anticipates will enable the airline to grow annual traffic to 200 million people per annum by 2025.

The AFA will operate and run the new €50m Training Centre, and will play a central role in recruiting for the 5,000 new roles.

“After what has been an incredibly difficult 18 months, today’s announcement is a real vote of confidence in the airline industry as it rebuilds after the pandemic," Tánaiste Leo Varadkar said on Tuesday.

"This €50m investment in a new training centre and the creation of 5,000 jobs across Europe, will mean fantastic opportunities." 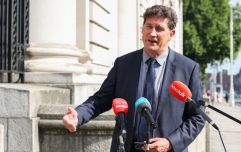 END_OF_DOCUMENT_TOKEN_TO_BE_REPLACED

Speaking at the opening, Ryanair CEO Eddie Wilson said: "We have invested over €50m in this state-of-the-art Training Centre, and our agreement with AFA will deliver over 5,000 highly trained pilots, cabin crew, engineers and ground operations professionals over the next five years.

"The AFA team have been a recruitment and training partner of Ryanair for many years, and we look forward to continuing to invest in this agreement, which has to date, enabled Ryanair to recruit and train over 18,000 highly qualified aviation professionals.”

Director of the AFA, Francis Farrell said that they are "honoured to have been selected as Ryanair’s exclusive cadet training partner here in Ireland."

"Ireland has always been a centre for high-quality aviation professionals and AFA’s agreement with Ryanair will create 5,000 new jobs, both here in Ireland and across Europe as Ryanair continues to recover and grow post-Covid," he added.