Parts of the state of Victoria are on high alert as bushfires continue to rage in sweltering temperatures.

Officials in Victoria in Australia have issued code red warnings as bushfires continue to rage in the state and hazardous weather conditions prevail elsewhere in the country.

The Victorian Country Fire Authority (CFA) saw fit to declare a total fire ban on Thursday, a measure taken when fires are likely to spread rapidly and could be difficult to control.

Furthermore, two districts in Victoria – Mallee and Northern Country – were issued with code red warnings, the highest level of rating in Victoria, signifying the worst conditions for grassfires or bushfires. 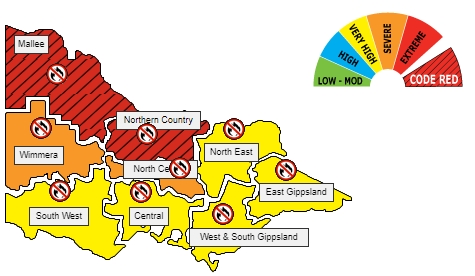 A code red fire danger rating warns that if a fire were to start, it will be uncontrollable, unpredictable and fast moving, fire services will find it difficult to put out and there is a high likelihood that people in the path of a fire will be killed or seriously injured.

The CFA warns that even the best designed, constructed and prepared homes will not be safe in these conditions and that the safest option for survival is to leave high-risk bushfire areas the night before or early in the morning of a code red day.

A ‘severe’ or ‘very high’ fire rating has been applied to several other areas in Victoria, but those warnings are likely to be downgraded in the coming days according to the CFA’s four-day forecast. 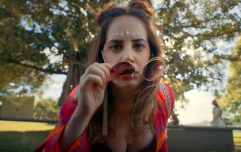 END_OF_DOCUMENT_TOKEN_TO_BE_REPLACED

Temperatures in the state have reached 44 degrees in places, while this week Melbourne matched its hottest November day on record with the mercury tipping 40.9 degrees.

The warnings for Victoria come as firefighters continue to battle bushfires in South Australia as well as Victoria, while in New South Wales, Sydney is amongst large parts of the state that have been blanketed in heavy smoke from bushfires.

In South Australia, six people have died in bushfires since last month, hundreds of homes have been destroyed, thousands of people have been left without power and schools have been closed in high risk areas as a result of devastating bushfires in the state.

Other major victims of the bushfires include Australia's koala population, with more than 350 of the marsupials feared dead in the blazes.

A woman was hailed as a hero after a video emerged of her endangering herself to rescue a scorched koala from a bushfire earlier this week.


popular
Downton Abbey creator confirms plans to start work on a sequel
The 50 most iconic songs of all time* have been revealed
Louis Walsh explains why he grabbed Mel B's backside on television
QUIZ: How many of these Recess characters can you name?
WATCH: Trailer released for CG remake of Pokémon: Mewtwo Strikes Back
QUIZ: How many of these characters from Breaking Bad can you name?
Disney+ has brought forward its launch date in Ireland and confirmed its price
You may also like
18 hours ago
Four people dead as China confirms Wuhan coronavirus can be transmitted by humans
1 day ago
Ireland now has the fifth largest number of billionaires per capita
4 days ago
Study finds that cattle can talk to each other about how they feel
6 days ago
Ireland are looking for youngsters to represent us at Junior Eurovision
1 week ago
Six people dead after huge sinkhole in China swallows bus and pedestrians
1 week ago
Queen to hold crisis talks over Prince Harry and Meghan announcement
Next Page