82% of Irish adults will have their first vaccine dose by the end of June, says Taoiseach

This announcement came minutes after it was reported that AstraZeneca would not deliver its contracted supply amount to the EU.

82% of Irish adults will have received their first vaccine dose by the end of June, according to An Taoiseach Micheál Martin.

Speaking to the nation on Tuesday evening, Martin cited a number of vaccine statistics after announcing that Level 5 restrictions will remain in place until 5 April. 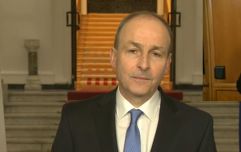 CONFIRMED: Glorious normality beckons as vast majority of restrictions to be scrapped

END_OF_DOCUMENT_TOKEN_TO_BE_REPLACED

A vaccine supply forecast was released as part of the Government's Living with Covid plan, which anticipated that 1.2 million doses will be administered by the end of March.

It also projects that up to 60% of people over 18 will be fully vaccinated by the end of June.

Shortly after Martin's announcement, Reuters reported that an EU official informed them that AstraZeneca expects to deliver less than half the Covid-19 vaccines it was contracted to supply the European Union in the second quarter.

The EU's ability to meet its target of vaccinating 70% of adults by the summer is expected to take a hit as a result.

Martin said that March must see case numbers decrease, as well as hospitalisations and ICU figures, so that things can reopen and stay open in the near future.

popular
One of the best action movies of recent years is finally available to watch at home
The JOE Movie Quiz: Week 138
Woman hospitalised following stag attack in Kerry
QUIZ: Give this General Knowledge Quiz a whirl
Gardaí appealing for witnesses in relation to alleged assaults in Sligo
QUIZ: Can you name every Batman actor in three minutes?
The JOE Friday Pub Quiz: Week 278
You may also like
2 days ago
Covid Restrictions: What can we expect to see today?
2 days ago
NPHET recommends major easing of Covid restrictions, including 8pm hospitality curfew
4 days ago
Healthcare staff who worked in Covid exposed environments to receive €1,000 bonus
5 days ago
Leo Varadkar wants to set March date as deadline to end "almost all" legal Covid restrictions
1 week ago
Novak Djokovic speaks out after losing visa battle in Australia
1 week ago
Boris Johnson regularly witnessed "wine-time Fridays" at Downing Street during pandemic - report
Next Page