When it comes to rousing speeches in famous films, very few stirring words are as fondly remembered as Bill Pullman's effort in Independence Day. Truth be told, there are probably some people that can remember that speech word-for-word.

Ok, hands up if you know it off by heart? 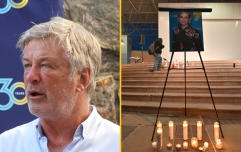 END_OF_DOCUMENT_TOKEN_TO_BE_REPLACED

Well, the audience at the Woodstock Film Festival in Kingston, New York was treated to a very different type of speech after the actor was honoured with the accolade of Excellence In Acting.

After taking to the podium, Pullman decided to rock back-and-forth on the shaky structure. As you can imagine, the award fell to the floor before it broke into two pieces.

Ever the pro, Pullman managed to save face with a quick remark.

See, that's why he was elected to the US president.

popular
Two new 24-hour bus services are coming to Dublin
Power-ranking the House of the Dragon characters after THAT big fire
Jeffrey Dahmer’s dad thinks he knows what’s to blame for son becoming a serial killer
QUIZ: Test your knowledge with this Ultimate Friends Character Quiz
€600 energy credits and free schoolbooks for children set to be announced in Budget 2023
An underseen disaster film is among the movies on TV tonight
Gardaí in Mayo make arrest in investigation into the death of Joseph Deacy
You may also like
2 days ago
A brilliant psychological thriller is among the movies on TV tonight
3 days ago
A brilliantly scary horror movie is among the movies on TV tonight
3 days ago
WATCH: Oscar winner Steven Price weighs in on #ReleaseTheAyerCut for Suicide Squad
3 days ago
The 6 must-watch brand-new arrivals coming to Disney+ in October
3 days ago
QUIZ: How well do you remember Avatar?
4 days ago
Amazon Prime Video has just added 20 very big movies to its library
Next Page